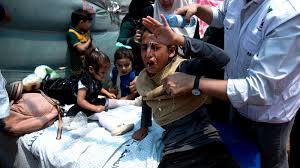 Morocco has strongly condemned the use of deadly excessive force by Israeli soldiers against unarmed Palestinians in occupied Gaza strip and voiced its total rejection of such acts violating international laws and adding more fuel to the fire in the region.

At least 60 Palestinians were killed Monday when Israeli troops fired at demonstrators protesting the transfer of US embassy from Tel Aviv to Al Quds.

It was the highest Palestinian death toll in a single day since Hamas-led demonstrations began along the border fence on March 30; in commemoration of the 70th anniversary of the Nakba, when an estimated 750,000 Palestinians were forcibly ex-pelled from their homes in 1948. Eight children under the age of 16 were num-bered among the victims, while over 2,400 Palestinians were wounded, according to Palestini-an officials. It was the highest number of casualties inflicted since the 2014 conflict with Israel inside Gaza.

King Mohammed VI, chairperson of Al Quds Committee of the Organization of Islamic Cooperation, sent Monday a message of solidarity and support to the Palestinian president Mahmoud Abbas.

In this message, the Moroccan Sovereign warned the international community against the dangerous fallout of the decision of US president Donald Trump to recognize Al Quds as capital of Israel and move its embassy to the Holy city.

The King recalled the messages he had sent to President Trump and to UN Chief Antonio Guterres last December, explaining the importance of the city of Al Quds not only for the parties to the conflict, but also for the followers of the three monotheistic religions.

King Mohammed VI warned that any Infringement of the internationally recognized legal and historical status of Jerusalem means one runs the risk of hurling the Palestinian issue into the quagmire of religious and ideological conflict.

The Moroccan Sovereign called for halting any action that could alter Al Quds’ established political status because the Holy city is at the heart of issues to be addressed during the final status negotiations.

The Arab League held Wednesday an emergency meeting to discuss the issue of international protection for the Palestinians and the US decision to move its embassy from Tel Aviv to Al Quds, a move viewed as an aggression and provocation to Arabs, Muslims and Christians.

At the UN, the Palestinian envoy Riyad Mansour spoke of a “crime against humanity” that should not go unpunished. “We condemn in the most emphatic terms the odious massacre committed by Israel in the Gaza Strip”, he added.

The Palestinian diplomat called for a halt to Israel’s military operations and a transparent international inquiry into what he said was a “brutal Israeli attack on Palestinian people who expressed their resistance”.