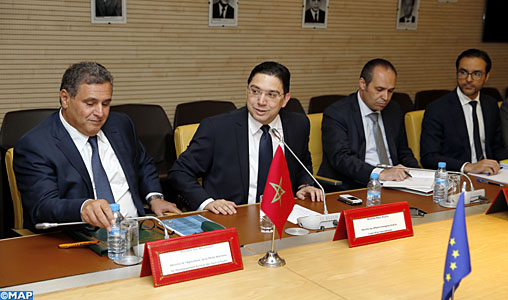 Morocco-EU Fisheries Agreement: National Cause Is a Red Line 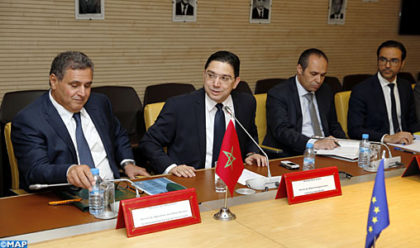 Morocco made it clear Thursday as negotiations on a new fisheries agreement with the European Union started in Rabat that the national cause is a red line and that the Kingdom’s higher interests, including its territorial integrity, are not negotiable.

Aziz Akhannouch, Minister of Agriculture and Maritime Fisheries, who chaired the launch of the technical negotiations for the renewal of the fisheries agreement that will include, like previous deals, the Moroccan Sahara provinces, said “There are red lines not to cross” such as the national cause.

Echoing him, Foreign Minister Nasser Bourita said “The national cause is not a subject of negotiation or compromise and all Moroccans are unanimous about this”.
The new Morocco-EU fisheries partnership protocol must take into account the higher interests of the Kingdom, including its territorial integrity and national unity, that are not negotiable, Bourita insisted during the meeting with officials of the European Fisheries Commission.

“As much as Morocco is committed to its partnership with the EU, its stand is clear when it comes to its national sovereignty and territorial integrity,” the minister noted.

In a statement to the media after the meeting, Akhannouch said “Morocco and the EU will start a new phase and I hope the negotiations will lead to a mutually beneficial agreement that respects the commitments of both sides”.

The Agriculture and Fisheries Minister also welcomed the results of the previous fishing protocols that have enabled Morocco to make significant investments in infrastructure and to support the implementation of the Halieutis Plan, a new development strategy for the fisheries sector in Morocco.

Bourita on his part said the negotiations on the fisheries agreement are taking place this time in a very special context marked in particular by “attempts to divert” the spirit of this agreement, and by “external attacks against this partnership”.

He added that the opening of the negotiations reflects the full support of the European Union and its member states for the preservation and strengthening of the comprehensive Morocco-EU partnership.

Bourita recalled that cooperation between Morocco and the EU in the field of fisheries is not new, the first agreement having been concluded in 1988. He expressed the wish to see the two parties conclude the negotiations as quickly as possible by banking on their 30 years of experience in this fundamental area of their partnership.

He also expressed hope that the conclusion of a new fisheries partnership protocol will allow Morocco and the EU to step up their relationship and to resume the negotiations on standby on such important topics as trade, security and migration.

The EU representative in Rabat Claudia Wiedey described as “positive” the launch of the negotiations. “This agreement is important for both Morocco and the European Union”.
She said the EU-Morocco fisheries partnership is one of the major pillars of relations between the two sides. Its main goal is the development of a mutually beneficial sustainable fishing.

Mme Weidey said the EU will continue to support Morocco’s fisheries sector through “Halieutis” plan, help the North African country modernize and improve governance of the fishing industry, promote sustainable fisheries and contribute to the protection of the marine environment.

The first phases of the negotiations will focus on issues of infrastructures, quotas and impact on the populations, mainly the inhabitants of the Southern Provinces.