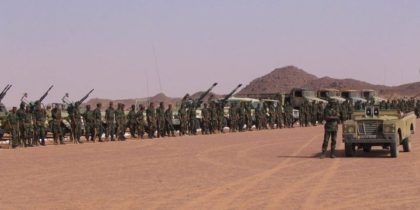 The recent incursions in the UN-monitored buffer zone in the Sahara territory by the Algerian-backed Polisario separatists triggered a firm response from Morocco, which declared that all options are now on the table including a military response.

The Moroccan Foreign Minister Nasser Bourita is not mincing his words. At the UN, he met Antonio Guterres to whom he expressed Morocco’s dissapointment at UN laxity in dealing with the Polisario violations of the 1991 ceasefire agreement.

Under the ceasefire and military agreements between Morocco and the MINURSO, the buffer zone area should be demilitarized, a provisions which has been breached on multiple occasions by the Polisario, which went as far as attempting to move its military headquarters to Bir Lahlou in the buffer zone.

Moving permanent Polisairo military or civilian structures from South Western Algeria to the Sahara territory was described by Moroccan officials as a casus belli that will sap all UN efforts to find a political solution to the conflict.

The Letter sent by King Mohammed VI to the UN chief made it clear that the Polisario’s banditry east of the Moroccan security wall will not be resolved the same way as the Guerguarat where the Algerian-backed militias indulged in all sorts of banditry but had to withdraw after UN pressure.

The King’s message was firm and uncompromising threatening to quell any attempt by the Polisario to occupy the area east of the berm.

Morocco considers that the berm it has built was a security measure and that its borders are with Algeria, hence the Polisario’s repetitive incursions are considered an act of aggression.

Morocco started building the wall during the guerrilla warfare with the Polisario, which broke out in the late 1970s in a cold war context. The completion of the wall enabled the Moroccan army to chase the Polisario militiamen within the Sahara without conducting hot pursuits into the Algerian territory where the Separatists are based.

The Tindouf-based militia are also attempting to divert attention from Morocco’s recent diplomatic breakthrough in Africa, notably after it gained support of countries that were until recently aligning with the Algerian-sponsored separatist thesis.

The recent events in the Sahara have shown that the Polisario is becoming more than ever a tool used by Algiers to destabilize Morocco and sap all efforts seeking to find a lasting, political and mutually acceptable solution based on the Moroccan autonomy initiative.