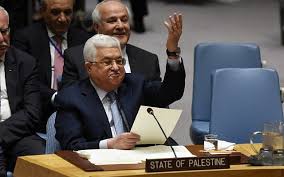 President of the Palestinian authority Mahmoud Abbas called for convening an international peace conference by mid-2018 to find a solution to the stalemate, describing the situation of the Palestinian people as “no longer bearable”.

In an address to the UN Security Council Tuesday, Abbas slammed the US unilateral decision to recognize Jerusalem as capital of Israel and urged world leaders to recognize an independent Palestinian state within the borders of 1967.

Abbas also called for putting an end to Israeli settlements, deploring that “Israel is acting as a state above the law.”

“Israel has transformed the occupation from a temporary situation … into a situation of permanent settlement colonization,” he said. “How can this happen? Israel shut the door on the two-state solution on the basis of the 1967 borders,” he said.

The Palestinians want to set up a state in the West Bank, Gaza Strip and east Jerusalem, lands Israel occupied by Israel following the 1967 war.

Guterres, who emphasized the Organization’s long-held support for a two-state solution to the Israeli-Palestinian conflict, stressed that “There is no Plan B.”

“This is a time for dialogue, for reconciliation, for reason,” the UN chief said, expressing concern that global consensus on the issue may be eroding.

UN Special Coordinator for the Middle East Process Nikolay Mladenov on his part noted that “regional tensions are taking an increasingly perilous turn”.

He reported on developments such as the need to maintain support for the UN agency assisting Palestinian refugees across the region, UNRWA, as it faces a substantial funding shortfall.

The UN Special Coordinator also urged the international community to continue advocating for “substantial” Israeli policy changes related to the West Bank, including halting settlement construction there, something the UN considers illegal under international law.