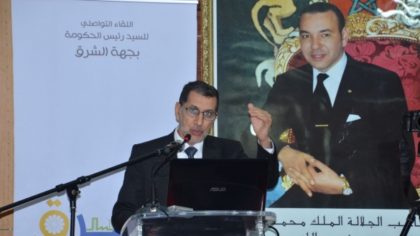 Head of the Government, Saad Eddine El Otmani, Saturday, visited the eastern town of Jerada, which has witnessed unrest and protest in the wake of the death of three miners in abandoned mines late last year and promised economic alternatives benefiting the locals.

During his visit, which came following a study by the mining ministry on the mines of Jerrada, Head of the government announced a series of measures to offer job opportunities to the city’s youth and address the complaints of the local population.

He also mentioned a set of social initiatives benefiting the workers of the abandoned coal mines “Charbonnages du Maroc (CDM)”, citing the transfer of houses occupied by some workers.

He noted that 2.5 million dirhams will be provided to the legal unit in charge of coordination with the pension and insurance fund in order to manage records of occupational diseases of the employees of Charbonnages du Maroc.

Regarding efforts to develop the province, El Othmani said that the Jerada Industrial Zone, whose works have been launched, will enable young entrepreneurs to carry out projects through allocation of land.

Head of the government also shed light on efforts to develop agriculture in the region, saying that 3000 hectares will be developed including 2000 hectares dedicated to young farmers.