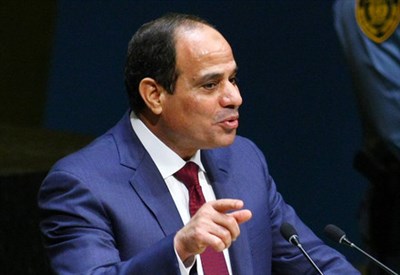 President Fattah al-Sisi Wednesday openly warned the opposition and vowed to deal with actions that may confront his rule as the country’s opposition figures call for boycott of coming March elections that Sisi is certain to win.

“Be warned. What happened seven or eight years ago, will not happen again in Egypt,” Sissi said, a reference to mass protests in 2011 when millions of Egyptians took to the street calling for change. The protests led to the removal of autocratic leader Hosni Mubarak and his regime.

“What didn’t work then, will not work now. No … it looks like you don’t know me well,” he said at the inauguration of the North African country’s mammoth Zohr gas field.

Al-Sisi’s stern warning came a day after over 150 opposition figures and dissents called the nation to boycott March 26-28 presidential election in which Egyptians will choose between al-Sisi himself and a supporter-turned challenger.

Annan has been detained for allegedly breaching military procedure after he announced his candidacy.

Sisi warned that he could ask Egyptians to give him a ‘mandate’ to deal with anyone who ‘wants to mess up with Egypt’.

Sisi’s rule has been marked by an iron-hand crackdown on dissents. Authorities have mostly directed their campaign against the Muslim Brotherhood to which Morsi belongs. The movement has been banned and thousands of its members have been jailed or forced into exile.