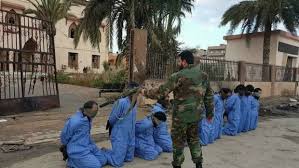 The UN Special Mission in Libya (UNSMIL) Wednesday expressed concerns over what it termed “brutal and outrageous summary executions” of prisoners in the city of Benghazi, at the scene of Tuesday double car bomb attacks.

UNSMIL’s reaction came following the emergence of a series of photos showing the execution of at least nine prisoners in blue jumpsuits in front of Bayaat al-Radwan mosque; a scene of Tuesday twin car bomb carnage that caused the death of over 40 people.

The UN mission pointed at Mahmoud al-Werfalli, a military commander, believed to be behind the execution.

“(The UN) demands the handing over of Mahmoud al-Werfalli immediately to (the ICC) as it documented at least 5 similar cases, in 2017 alone, carried out or ordered by al-Werfalli,” UNSMIL said on its Twitter account.

“Those responsible for committing or ordering summary executions are criminally liable under international law.”

The UN blames al-Werfalli because he resembles a gunman in military camouflage, pointing a gun at the head of the first of a row of blindfolded kneeling men in a first image, reports say.

Another photo shows all but three of the people slumped forward on the road as the gunman makes his way along the line, Middle East Eye (MEE) reports.

The UN Secretary General Antonio Guterres who denounced the bombings said he is also alarmed by reports of summary executions being carried out in Benghazi in retaliation for the attack.

The Secretary-General who reiterated that there can be no military solution to the Libyan crisis, underlined that “the perpetrators of the attack in Al-Salmani, and of any criminal acts carried out in retaliation, must be brought to justice’’, his spokesperson said, without mentioning the name of Werfalli.

Werfalli whose unit is part of the Libyan National Army (LNA) steered by field Marshall Khalifa Haftar is wanted by the ICC for similar crimes committed last year.

The LNA refused to hand over their man saying they launched an investigation and that Werfalli had been suspended.

However, if the photos of Warfali conducting summary executions are true, it would be further evidence that he had not been arrested by the LNA, as they had previously claimed, commented the Libya Herald.

The International Criminal Court (ICC) had issued a warrant for the arrest of Warfali on 15 August 2017 to answer charges that he had been involved in seven incidents in which 33 bound prisoners were killed, the paper recalled, adding that in September last year, the supposedly-detained Warfali was linked to five fresh murders, this time in Ajdabiya.