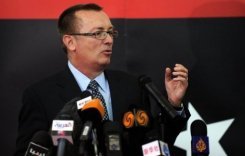 UN Under-Secretary for Political Affairs has underlined the world body’s commitment to democratic elections in Libya, after field Marshal Khalifa Haftar declared that the oil-rich country is not ready for democracy and that he would overrun the country should reconciliation and proposed elections fail to go rightly.

Jeffrey Feltman was in Tripoli Thursday where he met with the UN-backed Government of National Accord (GNA) and its leader Faiez Serraj in the presence of the UN Special envoy for Libya Ghassan Salame.

He reportedly flew to Tobruk also to meet with members of the opposed institution, the Tobruk-based House of Representative (HoR), claiming sovereignty over the country.

Feltman expressed optimism as to the prospects of the election plan proposed by Salame in his September-revealed action plan touted to enable Libya to regain its stability.

The North African country has been on the lookout for stability and peace since the fall of Muammar Gaddafi in 2011. Elections held in 2014 further tilted the country towards chaos.

Salame’s plan has suggested a one-year transition with elections in the second half of 2018. However the plan has been suffering from disagreements over changes to be made to the December 2015 Libyan Political Agreement (LPA) signed in Morocco.

The UN pushes in Libya are taking place after HoR’s ally, Khalifa Hafter threatened to seize power if the elections are rigged. He initially endorsed the election plan, with many believing he would enter the race.

The army commander is backed by Russia, Egypt, United Arab Emirates (UAE), and seemingly by the EU and the UK.

In an interview with Paris-based Jeune Afrique magazine, he said “the upcoming elections in the country must bring a solution to the current bloodshed, but if the situation and the chaos continue after the elections, then we will say ‘enough is enough’ and take action”.

Haftar, who claims he has a 75,000-strong army under his control, has extended his supervision over vast swathes of the country, including main oil terminals.