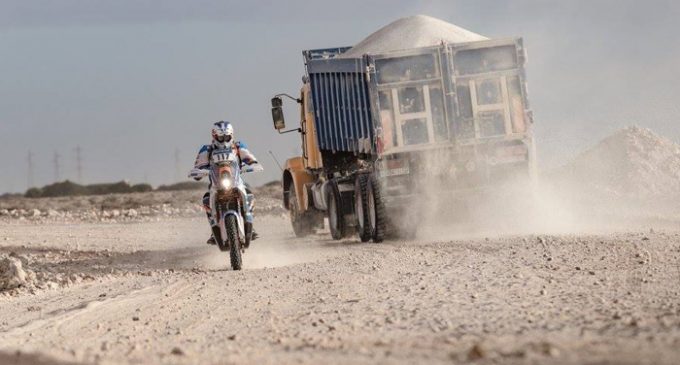 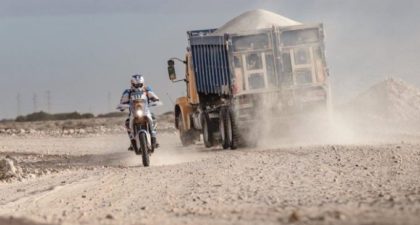 The participants in the International Rally-Raid, Africa Eco Race, ignored the threats and injunctions of the Polisario and crossed safely the Guerguarat crossing post at the Moroccan-Mauritanian border this Monday (January 8).

During the crossing, under the watchful eye of the MINURSO, participants who came from the city of Dakhla, were brandishing posters stating the Sahara is Moroccan while Moroccan and Mauritanian flags were flowing all along the road.

Despite the Polisario’s threats, the Africa Eco Race has crossed Guergarat without a hitch, an organizer was quoted by Moroccan Telquel.ma as saying.

The hundred or so participants in the rally crossed the Moroccan-Mauritanian border without any trouble on January 8, Thierry Scharff, a race organizer and media officer, told Telquel, from the Mauritanian border post. “We’ve come out of Morocco. All the competitors have crossed the post. There are only a few elements of the assistance team that are still in Morocco,” said Thierry Scharff.

The rally of cars, motorbikes and trucks departed from Monaco on December 31 and is due to reach Dakar on January 14.

After a day of rest Sunday in Dakhla, competitors started a new stage in Mauritania between Boulanouar and Chami in the early afternoon of this Monday.

In a video released Jan. 7, the Polisario threatened to prevent participants in the Africa Eco Race rally from crossing the Guerguarat buffer zone, where elements of the separatist Front have been reported for the past few days, “in violation of the ceasefire agreement” as stated in a letter Morocco sent to the UN last Friday (Jan.5).

Morocco had strongly condemned the deployment of Polisario militiamen in the demilitarized border crossing with Mauritania, in Guerguarat, as a blatant violation of the UN brokered ceasefire agreement and a disregard for the calls made by the UN Secretary General for the withdrawal of all troops from the demilitarized buffer strip.

Meanwhile, the UN Secretary General Antonio Guterres warned the Polisario of obstructing commercial traffic flow between Morocco and Mauritania, and called on the front to retreat from the area. “Regular civilian and commercial traffic should not be obstructed and no action should be taken, which may constitute a change to the status quo of the Buffer Strip,” Guterres said in a statement relayed by his Deputy Spokesman Farhan Haq.