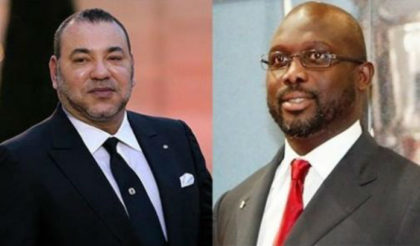 King Mohammed VI of Morocco has had a telephone call with President-Elect George Weah, a former international football star, who won Liberia’s presidential election, defeating Vice-president Joseph Boakai in a runoff with 61.5 pc of the vote.

During the phone call, the Moroccan Sovereign offered his “warmest congratulations” to George Weah for his victory, said a statement released by the royal office.

The Liberian-Elect president expressed “his strong determination to strengthen the multidimensional relations” existing between the two African countries, added the statement.

Weah, 51, is due to be sworn-in on January 22, taking over from Ellen Johnson Sirleaf, the first female elected head of state in Africa, in 2005.

The ex-footballer topped the first round of voting in October with 38.4 pc but failed to win the 50 pc necessary to avoid a runoff. His rival Boakai came second with 28.8 pc.

The runoff was delayed twice after several parties took their allegations of malpractice to the Supreme Court. It finally took place with a low turnout on December 26.

Liberia’s new president is facing several socioeconomic challenges. Boosting the economy and creating job opportunities will top his agenda since many of his supporters in this extremely poor country are young, unemployed or underemployed, and struggling financially.

Weah played for Paris Saint-Germain and AC Milan in the 1990s before moving to England late in his career for spells at Chelsea and Manchester City.

He grew up in Clara Town, a poor suburb of Monrovia, and played football across the river in West Point, Liberia’s biggest informal settlement, where he still has a large fan base.
An estimated 250,000 people died during two civil wars between 1989-2003 and, more recently, Liberia suffered a devastating Ebola outbreak.