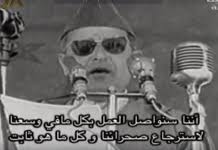 King Mohammed VI delivered a speech on the occasion of the 42 anniversary of the Green March in which he reiterated firm commitment to safeguarding Morocco’s territorial integrity in keeping with an unshakable covenant binding the Throne and the people together.

In his speech, the Monarch shed light on milestones in the process of retrieving Morocco’s southern provinces, the Sahara, from Spanish colonialism, pointing out that Morocco will celebrate, in a few weeks, the 60th anniversary of the speech given by his grandfather, late King Mohammed V, at M’hamid al-Ghizlan which “confirmed a basic fact which no one can deny, namely the Moroccanness of the Sahara and the Moroccan people’s unwavering commitment to their land.”

When late King Mohammed V gave his historic speech in the Saharan village of M’hamid al-Ghizlan, no claims had been put forward regarding the liberation of the Sahara, except for Morocco’s legitimate demands, said the Monarch, recalling that back then, Algeria- which has nurtured the separatist thesis- was still under the yoke of French colonialism.

King Mohammed V’s speech “reiterated Morocco’s historical and legal rights in respect of the Sahara, when he solemnly and publicly declared to the representatives of the Sahrawi tribal sheikhs, who swore allegiance (bei’a) to him, that he would continue to work to recover the Sahara, in keeping with Morocco’s historical rights and in accordance with the will of the region’s inhabitants,” said the Monarch.

In keeping with a solemn promise, King Mohammed VI said that he continues to “uphold the same commitment to make sure our citizens in those territories are honored, promote development in the region, free our brothers and sisters in the camps and ensure those territories are fully integrated into the motherland.”