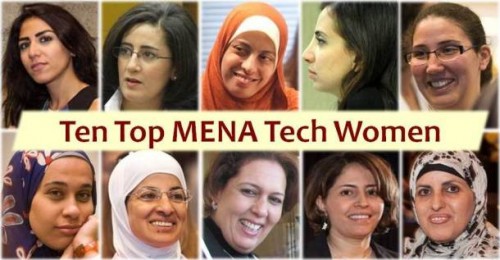 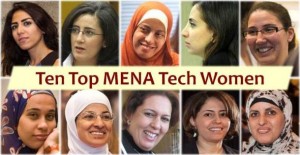 Four Maghreban women were listed among ten emerging women leaders in science, technology, engineering and math in the Middle East and North Africa region in 2012.
These ten Middle Eastern and North African women were part of a 41 member group that participated in the TechWomen program launched by U.S. Secretary of State Hillary Clinton in December 2010 to bring women out of the shadow and put an end to their marginalization that lasted for too long.
Under this program, these women who excel in science, technology, engineering and math (STEM) fields mentored with their US counterparts in Silicon Valley.
The MENA women in the program also got a firsthand view of how American women balance their work and home life, an important consideration for women from many countries in the MENA region, where female work outside the home is something quite new.
One of the women on the 2012 Emerging ‘Tech Women’ Leaders list is Moroccan Houda Chakiri. She is general manager and shareholder at Enhanced Technologies, a Morocco IT company specializing in developing e-Government solutions. Houda has a bachelor’s degree in Physics, master’s degree in Laser Physics and Master of Science in Computer Networks. She has worked as an IT manager overseeing different R&D projects, and is currently working to manage the change that introduction of ICT brings to the organizational, political, and social levels in public administration. She was selected among top ten finalists of Sawaed contest 2008-2009 for generating innovative ideas on using ICT to promote Arabic Content in the Arab World and was named among 100 best young social entrepreneurs in the world to attend GK3 Kuala Lumpur, Malaysia in December 2007.
Another woman from the Maghreb on the list is Baya Chekired from Algeria, who runs maintenance policy at GRTE, the company managing Algeria power transmission, and who was the first woman at Sonelgaz when she began in 1997 as an engineer in protection/ automation for regional electricity transmission.
Two Tunisians are also on the list. These are agronomy engineer and soil science specialist Farida Joumade Mansouri, who heads Organic Farming department at Tunisia’s Ministry of Agriculture & Development, and Olfa Khelifi, an Ass’t professor at the Higher Institute of Applied Biological Sciences of Tunis.
Two Egyptians were among the distinguished ten MENA Emerging ‘Tech Women’ Leaders. These are Heba Hosny, a senior quality assurance engineer at  Vimov LLC with a computer science degree, and Noha Abousonna, a research assistant at Nile University in Egypt.
Three Lebanese were also on the list, namely Jessica Obeid, an energy engineer at Community Energy Efficiency & Renewable Energy Demonstration Program for the Recovery of Lebanon (CEDRO-UNDP), Adla Chatila, an IT and finance director at Almakassed Association, a nonprofit association established in 1878 to provide education, health and social services, and Zeina Hobaika Ass’t prof. of Sciences, Saint Joseph U. in Beirut, who devotes her time to anti-HIV drug design.
The tenth emerging TechWomen Leader in Mena region is Arwa Al Eryani from Yemen. She is dean of the Computer Science and Technology faculty at Saba University in Yemen.
In 2012, the program was attended by 41 TechWomen Emerging Leaders from Algeria, Egypt, Jordan, Lebanon, Morocco, Palestine, Tunisia and Yemen. In 2013, TechWomen will expand to include women from Cameroon, Kenya, Libya, Nigeria, Rwanda, Sierra Leone, South Africa and Zimbabwe.
The TechWomen initiative was launched in response to President Barack Obama’s call for an expansion in educational exchanges in the areas of entrepreneurship, science and innovation.  The pilot program began the following year, bringing a select number of women to the US for a month-long professional peer mentorship. Their US counterparts also had the opportunity to travel to participating countries for networking and workshops.
In essence, the program seeks to encourage these women to use the knowledge they gain in the US to create positive social change in their home countries and also to create opportunities for greater understanding between the United States and the native countries of participating women.