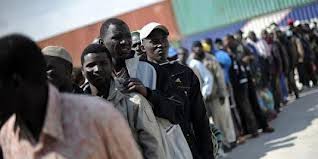 After AI, HRW Decries Algeria for Ill-treatment of African Migrants

Algerian authorities have been rounding up sub-Saharan Africans in and around Algiers and have deported more than 3,000 to Niger since August 25, 2017, without giving them an opportunity to challenge their expulsion, Human Rights Watch said.

Those expelled include migrants who have lived and worked for years in Algeria, pregnant women, families with newborn babies, and about 25 unaccompanied children.

“Nothing justifies rounding up people based on their skin color, and then deporting them,” said Sarah Leah Whitson, Middle East and North Africa director at Human Rights Watch. “A country’s power to control its borders is not a license to treat people like criminals or to assume they have no right to be there because of their race or ethnicity.”

Few days ago, Niger’s Foreign Minister Ibrahim Yacoubou officially expressed his country’s concern over the surge in the numbers who were forcibly expelled by Algeria and abandoned on the borders in harsh conditions.

“Over 20,000 Nigeriens were kicked out of Algeria in four years…this is a major concern for us,” said Yacoubou, voicing hope to see Algeria cooperate with Niger on the migration issue.

Niger’s protests at the inhumane treatment suffered by its nationals in Algeria is a reaction to the black man-hunt launched by Algerian authorities, which are surfing on a wave of anti-migrant populism espoused by senior political figures in the country, who described migrants as a source of criminality, and as representing a threat to national security.

During successive waves of arrests, security forces rounded up sub-Saharan migrants on the streets, on construction sites where many work, and in their homes. The migrants were taken to a facility in Zeralda, a suburb of the capital, where they spent one to three days in crowded halls with no mattresses and little to eat during the day, witnesses told Human Rights Watch. The migrants were then bused 1,900 kilometers south to a camp in Tamanrasset, then expelled to Niger.

A nongovernmental organization based in Gao, Mali, said that several Malians were also expelled at the Algeria-Mali border, an insecure region with minimal government presence where armed groups, including some linked to Al-Qaeda, are active.

Those expelled have included both Nigeriens and hundreds of citizens of other countries such as Mali, Cameroon, Côte d’Ivoire, and Guinea – all nationals of sub-Saharan countries, according to the International Rescue Committee (IRC), which runs an assistance program for migrants in Agadez, Niger.

Under international law, Algeria should not discriminate based on race or ethnicity or subject migrants to arbitrary detention, inhuman and degrading treatment.

For its part, Amnesty International had slammed the racial and discriminatory crackdown launched by Algerian authorities against sub-Saharan migrants, rounding up and forcibly expelling more than 2,000 of them to Niger and Mali over the past three weeks.

Amnesty condemned the arbitrary arrests made by the Algerian authorities on a basis of racial profiling. Some of those arrested and deported are undocumented migrants, while others have valid visas.