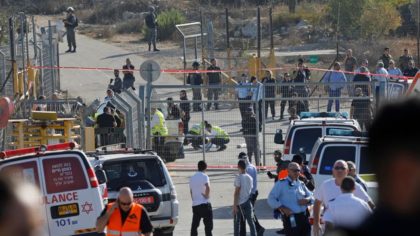 A 37-year old Palestinian killed three Israelis namely one border police officer and two security guards, in a shooting at the back entrance of the settlement of Har Adar on Tuesday, reports say.
The Palestinian who had a work permit and reportedly from the village of Beit Surik in northern West Bank arrived with a group of Palestinians workers at rear entrance of the settlement situated near Jerusalem.
He was asked to stop but pulled out a gun from his shirt and opened fire on the Israelis who retaliated.
He was shot but died of his injuries at hospital. Another Israeli, the security coordinator of the settlement was also seriously wounded and has been transported to hospital.
The Israel army imposed a siege on Beit Surik and only allows the inhabitants to leave on humanitarian ground.
The incident is the second attack since October 2015 following waves of knife, gun, car-ramming attacks by Palestinians.
Hamas following the attack noted that all Israel’s efforts to conquer Palestinian territories and to Judaize Jerusalem will not remain unpunished.
Palestinians have stood against Israel’s continuous colonization of their territories and the slow but steady occupation of Jerusalem that they deem to be an Arab city.
The UN envoy to the region, Nickolay Mladenov told the UN Security Council Monday that Israel has failed to comply with the Council’s request for a halt to all settlement activities.
The UN envoy noted that the unlawful policy undermines the UN approach for two-state solution.