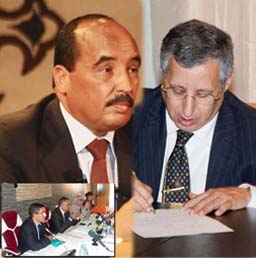 Mauritania: Team of lawyers battles for drop of legal case against 13 senators

A team of lawyers has embarked on legal proceedings to drop cases against 13 Mauritanian senators accused of taking money from the President’s cousin Mohamed Bouatmatou, known as an opponent of the Mauritanian ruler.

The lawyers have requested the drop of the charges against the 13 senators in a request to the country’s court of appeal.

The lawyers using article 50 of the constitution believe that the defendants are being accused because of their opposition to the August 5 referendum.

Ghada was arrested in his house in August by men in plain clothes after being prevented from crossing into neighboring Senegal.

He led the opposition’s boycott of August 5 referendum. Parties opposed to the Mauritanian president said the referendum was a step towards extending Ould Abdel Aziz’s term.

The prosecutor’s office then noted that it had obtained corroborated information that several people planned corruption under “an organized structure aimed at destabilizing the general peace.”

Other senators are being investigated.

The businessman is the President’s cousin, but relations between the two men cooled down over the years following Abdel Aziz’s military coup.

Bouatmatou was forced to exile in Morocco after the regime sought to arrest him.

North Africa Post's news desk is composed of journalists and editors, who are constantly working to provide new and accurate stories to NAP readers.
NEWER POSTMorocco to Inject $40 Billion in Energy Sector by 2030
OLDER POSTThe Plight of Minorities in Algeria