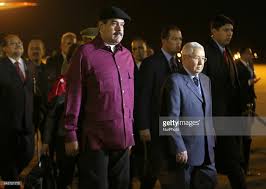 On his way back from Astana where he attended a summit of the Organisation of Islamic Cooperation (OIC) in his capacity as president of the Non-Aligned Movement, President Maduro of Venezuela stopped in Algeria where he had talks on means to halt the oil price glut.

Maduro could obviously not meet Algeria’s ailing President Bouteflika, although a meeting was scheduled. Bouteflika has been putting off meetings with Heads of State for a year due to his sickness.

Algeria and Venezuela, two OPEC nations, are both facing economic hardships as they have both failed to use their oil wealth to diversify their economies away from utter dependence on hydrocarbon revenues.

Maduro discussed with Algerian officials the means to extend the OPEC agreement to curb the oil supply in international market in a bid to halt the descending prices.

“We are continuing our efforts to obtain equitable oil prices for our industry,” Maduro told the press in Algiers.

The situation in Venezuela is deemed as an omen for what could happen to Algeria once it loses its oil mantra. Social protests, instability and lack of basic services is what could also happen to Algeria if oil prices remain at current levels, as both countries suffer from the “oil curse”.

Divided and chaotic, Venezuela seeks support from like-minded states such as Algeria. Both countries share the same rentier state economy coupled with a firm authoritarian grip and ideological anachronism at the helm of the regime.

The two countries are also in the grip of a political crisis, as President Maduro could erode the last vestiges of democracy by his power grab. Likewise, the opacity characterizing the Algerian repressive regime is raising questions over the potential successor of President Bouteflika.