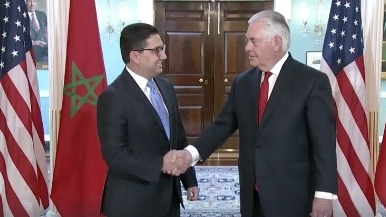 Morocco’s African leadership, the situation in North Africa and the Sahel as well as the longstanding American-Moroccan relations were at the heart of talks Morocco’s Foreign Minister Nasser Bourita had with US Secretary of State Rex Tillerson and other US officials during a visit to Washington Thursday.

In a statement to the press, Bourita said that, during the meetings, US officials lauded Morocco as a model of political and economic reform and commended its African foreign policy.

The Libyan crisis and the credible mediation efforts led by the Kingdom were discussed along with the Sahara issue said the Minister, noting that US officials reiterated that Morocco’s autonomy proposal for its southern provinces, the Sahara, remains a “credible, serious and realistic” solution to the territorial dispute.

At the bilateral level, Bourita said that his working visit to Washington reaffirmed the “excellent and sound character of the unique partnership” between the two countries.

He recalled that King Mohammed VI has been attaching utmost importance to strengthening the foundations of this strategic partnership, which paved the way for the signing of a free trade agreement in 2006 and the launch of a strategic dialogue in 2012.

The momentum in US-Moroccan relations takes shape in multiple areas, he said, noting in particular the close security, military and cultural cooperation between the two countries.

Bourita told the press that his visit to Washington is a chance to celebrate the ever-developing cooperation mechanisms and to consolidate them further in tandem with regional and international development.

During his visit to Washington, Bourita held separate talks with US Secretary of State Rex Tillerson, Assistant Secretary of State for Near-East affairs, David Satterfield, and Deputy Special Presidential Envoy for the Global Coalition to Counter ISIL, Terry Wolff.

He also met with chairmen of Foreign Affairs Committees in the Senate and the House of Representatives of the US Congress, Bob Corker and Ed Royce in addition to President Trump’s Senior Adviser, Jared Kushner.