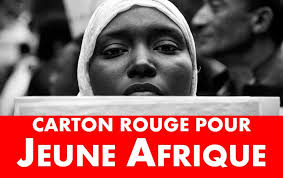 Morocco has vehemently denounced as “reprehensible” the cover published by Jeune Afrique magazine in its latest issue associating between Morocco and terrorism.

By putting photos of the terrorists involved in the Catalonia attack with the big title: “Terrorism born in Morocco”, the magazine chose to ride on the anti-Moroccan tide that has been launched by far-rightist groups on social media looking for a scapegoat to explain failed migration policies and lack of oversight over radicalization factors.

The Spokesperson for the Moroccan government, Mustapha El Khalfi condemned this unprofessional choice of a cover that associates Morocco as a nation, people and institution with a bunch of terrorists who have been born in Morocco but have been radicalized in Spain.

He said, at a press briefing following the weekly cabinet meeting, that such a cover is part of a heinous campaign that seeks to create stereotypes and take Morocco as a scapegoat to explain terrorism.

Khalfi explained that raising the Moroccan origins of the perpetrators of the Catalonia terrorist attacks leads the debate over terrorism astray from the deep causes of extremism in Europe.

The Spokesperson added that on the ground, Morocco remains one of the most insulated countries from terrorism in the MENA region and that its multilayered antiterrorism strategy includes security, social, economic and religious dimensions.

Morocco’s steadfast commitment to international cooperation against terrorism is praised and its counterterrorism experience is wanted by many countries, he underscored.

Spreading stereotypes stigmatizing Morocco for being the birth place of a bunch of youth who were radicalized in Europe is thus an “unjust campaign” that is contradicted with the success of Morocco in combating terrorism at home and abroad.