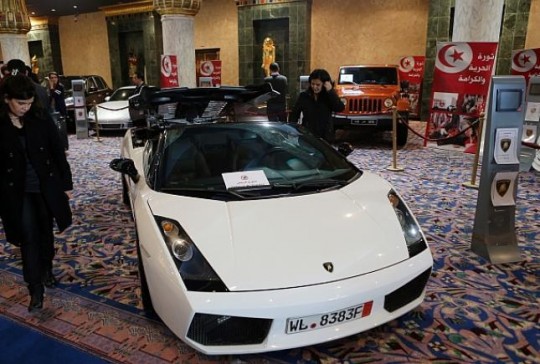 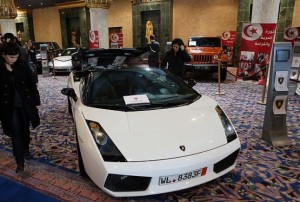 The Tunisian authorities are putting up for auction thousands of luxury items that were once owned by toppled dictator Zine El Abidine Ali and his family. They hope to raise at least 10 million euros to fund several development projects.
The list of goods put on sale includes a pair of miniature gold sphinxes, a diamond-encrusted pen, dazzling 40 luxury cars, thousands of unique clothing, jewelry and art works. These items can be viewed by the public and curious visitors for a fee. Large crowds are drawn to Ben Ali’s collection of cars which includes a Lamborghini Gallardo LP 460, a Bentley Continental sports car, an armored Cadillac, a Maybach 62 and a rare handmade Mercedes.
Ben Ali’s suits are expected to be sold for 3,000 Euros each, while coats, shoes and bags of his wife Leila Trabelsi, known for her lavish style, could go for upto 4,000 Euros a piece.
Tunisian officials say these items are only 20 to 30 pc of Ben Ali’s possessions. All the proceeds from the auction will go to the state budget of the North African country wherein unemployment stands at around 17 pc. Last year, the Tunisian economy shrank 2.2 pc despite efforts to restore investors’ confidence.
Ben Ali, who is taking refuge in Saudi Arabia with his family, had been sentenced by a military court to life in prison in absentia for his responsibility in the bloody crackdown on protesters.
The Tunisian dictator, who ruled the North African country with an iron fist for 23 years, was found guilty of “inciting disorder and murder” of pro-democracy demonstrators in a desperate move to save his crumbling autocratic regime and growing unrest.
He was also condemned in other separate trials and given heavy jail terms for embezzlement, illegal possession of weapons and narcotics, housing fraud and abuse of power. His fall sparked the Arab Spring which is still sweeping the whole region and so far has led to regime change in Egypt, Libya and Yemen.
However, many Tunisians think that their situation has not improved much since Ben Ali’s departure. They say little has been done to tackle the economic grievances that fuelled the revolt, staging protests against the new Tunisian government dominated the Islamists. These popular protests are gaining momentum, raising fresh fears over the country political stability.