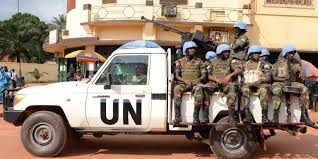 UN Secretary-General António Guterres has offered his condolences to the Government of Morocco following the killing of two more Moroccan peacekeepers deployed in the Central African Republic’s south-eastern city of Bangassou.

“This incident brings to nine the number of peacekeepers killed in service in Bangassou since the beginning of the year,” said a statement issued by a Spokesman for the Secretary-General.

According to the UN Multidimensional Integrated Stabilization Mission in the Central African Republic (MINUSCA), two of its Moroccan peacekeepers were killed in an ambush in Bangassou by suspected anti-Balaka fighters, while another peacekeeper was slightly injured. The incident followed the killing of a Moroccan peacekeeper on Sunday.

In the statement, the Secretary-General urged the Central African authorities to swiftly investigate this incident and all previous killings and bring the perpetrators to justice without delay.

The Secretary-General “is deeply concerned” at the fighting in the country’s southeast, heightened inter-ethnic tensions and efforts by spoilers to derail the stabilization process, added the statement.

“If allowed to continue, the prevailing situation risks undermining the hard-won gains achieved towards lasting peace. The Secretary-General calls on all parties to cease violence and to take action to avoid a further deterioration of the fragile security situation in the country,” the statement underlined.

The UN Security Council also joined in the condemnation of the attack. In a press statement, the Council expressed its readiness to apply sanctions against individuals and groups responsible for acts of undermining peace, stability or security in the country, including attacks against MINUSCA peacekeepers.

The 15-member body also called on all parties to cease violence immediately, and underlined the need for the Central African authorities, the sub-region and the international community to work in a concerted manner to avoid a further deterioration of the situation.

Morocco is participating with 1470 peacekeepers in MINUSCA, which has a total of 12,870 uniformed personnel including 10,750 military personnel and 2,080 police personnel.