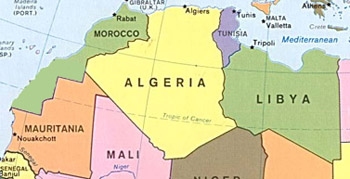 The decision by Mauritanian authorities to seal off borders with Algeria as a military zone forbidden to civilians is the tree that hides the forest. The closing of the borders signals cracks in the Algerian-Mauritanian short-lived alliance. As Mauritania tilts towards its Sahel neighbors in their efforts to counter the terrorism scourge, it takes steps away from the Algerian orbit.

The closing of the borders with Algeria was justified on grounds of fighting the proliferation of terrorist groups that engage in all kinds of criminal activities including kidnappings and all sorts of trafficking. The statement announcing the decision was marked by a serious tone warning “any civilian found in the area will be treated as a military target”.

This change of rhetoric by Mauritanian authorities is indicative of an impatience with Algeria’s approach towards fighting terrorism in the region.

Algeria, the native land of the leaders of most terrorist groups operating in the Sahel, has shown ambivalence in tackling the terrorist threats.

Therefore, the inclusion of Mauritania in the G5 anti-terrorism force under the umbrella of France and with the participation of Mali, Niger, Chad and Burkina Faso, has been received as a bad news in Algeria, which sought to use counterterrorism to maintain an upper hand on the Sahel states.

The creation of the G5 force signals the death of the Algiers-led Regional Command for Joint Counter Terrorism Operations (CEMOC), set up in 2010 with headquarters in Tamanrasset with the participation of Mauritania, Mali and Niger. The CEMOC has strikingly failed in accomplishing its goals of cracking down on terrorist groups largely due to Algeria’s reluctance to grant other countries forces the right to pursue terrorists in its territories.

Seven years after the establishment of CEMOC, Algeria’s genuine purposes became evident. The goal of Algeria was rather to keep France away from the Sahel and contain its archrival, Morocco. The creation of CEMOC was rather a failed attempt to assert regional hegemony rather than fight terrorist groups.

The connivance of Algeria’s intelligence services with Algerian national Moukhtar Belmoukhtar, aka Mr Marlboro is no secret. International reports have also accused Algeria of cooperating with Ansar Eddine and its leader Ag Ghali to quell the separatist ambitions of the secular Azawad movement. Algeria’s support for Ag Ghali was intended to foster extremism in the region to avert a spillover of an independent Tuareg state on its own Tuareg population.

Prior to the launch of the G5 joint force, President Emmanuel Macron called Algeria’s dead-living President Bouteflika and urged “concrete proposals” from Algiers to back the Malian peace-process. The call entails Algeria’s intransigence to unlock peace efforts in the Sahel country, considered by Algiers as its backyard. It also shows France’s growing impatience with Algeria’s hidden hand in the proliferation of terrorism in the Sahel.

The creation of the G5 has also infuriated Algerian political leaders. It is no coincidence that the anti-Sub-Saharan migrant rhetoric is on the surge following the formation of the G5 force.

In a nutshell, Mauritania’s decision to declare its borders with Algeria a military zone forbidden to civilians stems from a real concern of possible retaliations by terrorist groups close to Algerian security services as a punishment for its participation in the G5 force. It also shows wariness with Algeria’s counterterrorism policy in the region.