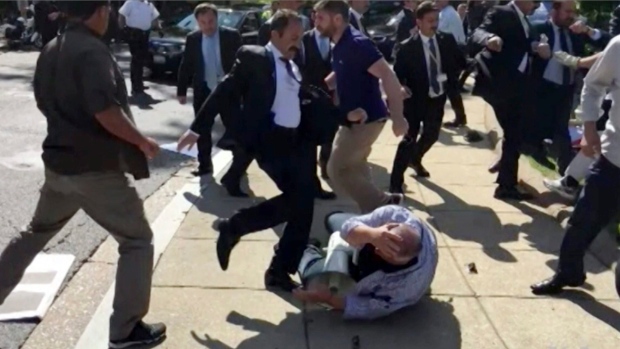 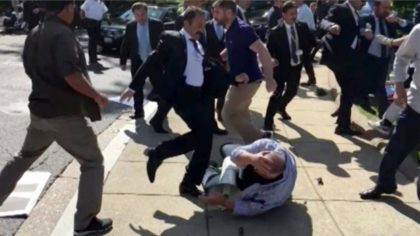 A month after President Erdogan’s security detail tussled with protesters outside the Turkish ambassador’s residence in Washington, the police department has announced on Thursday that it has obtained arrest warrants for 12 of the Turkish president’s bodyguards.

Erdogan deemed the warrants are baseless. “If my bodyguards cannot protect me, then why am I bringing them to America with me?” he said during an iftar dinner on Thursday.

Washington DC’s District Police Chief Peter Newsham said nine Turkish security agents, three Turkish police officers and two Canadians were being sought over the brawl. He said “the violence that was perpetrated against the protesters” cannot be tolerated. Two men on the list have been reportedly arrested.

U.S. Secretary of State Rex Tillerson said the charges against the bodyguards send “a clear message that the United States does not tolerate individuals who use intimidation and violence to stifle freedom of speech and legitimate political expression”.

Turkey argues that the protesters posed a security threat because they were not far away from the president.

Erdogan wondered “what kind of law is this” because the U.S. police was “doing nothing” with regards to the protesters. “Can you imagine what the response would have been if a similar incident had taken place in Turkey?”

The U.S. Ambassador was summoned by the Turkish Foreign Ministry to inform him that the decision of the US authorities is “wrong, biased and lacks legal basis.”

The Ministry added that “Turkish citizens cannot be held responsible for the incident that took place” because “the usual measures” taken “in similar high-level visits” were not taken by the U.S. authorities while it lamented “the tolerance… towards the so-called protesters… with flags and symbols of a terrorist organization.”

Turkey has not stated whether it will hand-over the officials concerned to the U.S. for prosecution or waive their diplomatic immunity.