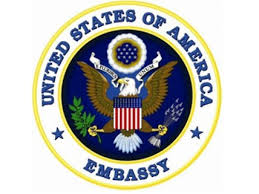 The US embassy in Cairo Monday instructed its staff to avoid religious sites outside Cairo as attacks against Coptic Christians multiply.
The embassy said on its website that risk for possible additional attacks is still high.

“Terrorists have attacked targets associated with the Christian community in Egypt. Incidents have occurred in both urban and isolated settings. Additional attacks may be possible,” the message said.

“Until further notice, personnel assigned to the US Mission in Egypt are prohibited from visiting religious sites outside greater Cairo. US citizens residing in or visiting Egypt should take prudent steps to enhance their personal security,” it said.

The ban came more than a week after masked gunmen assaulted a group of Coptic Christians traveling to a monastery in the Minya province, south of Cairo, killing at least 29 people and wounding 24.

The Islamic State group (IS) claimed responsibility for the attack.

Cairo blamed terror groups in Eastern Libya for the attack. President al-Sisi instructed aerial raids against the camps where the gunmen were reportedly trained.

Coptic Christians have been targeted by a series of attacks outside and inside the Egyptian capital. Attacks hit the Christian population in December and early April killing dozens of people.