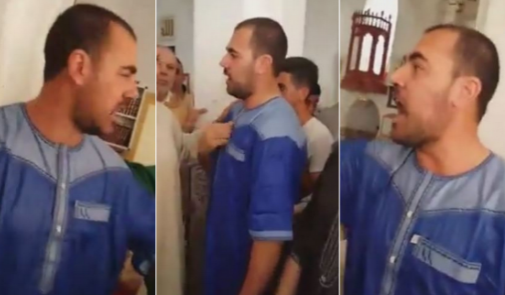 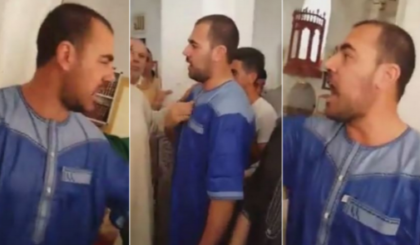 The Moroccan police is on a manhunt to arrest Nasser Zefzafi, the leader of the popular protests in the northern town of Al Hoceima, following his interruption of a Friday sermon at a local mosque.

The general prosecutor ordered the arrest of Zefzafi and the opening of an investigation in line with Article 222 of the penal code, which stipulates that those who hinder religious rites may face prison terms ranging from 6 months to 3 years.

Zefzafi burst out in the mosque criticizing the Imam for his sermon in which he likened the popular protests to sedation (Fitna). Zefzafi, who was surrounded by protesters, spoke with an ultra-conservative religious rhetoric against the Imam and the establishment and vowed to continue protests.

The Ministry of Religious Affairs and Endowments condemned Zefzaf’s “vile act”, saying that he hindered the sermon through creating “enormous disorder”.

Zefzafi “insulted the imam and fomented disturbances that undermined the calm and sacredness of the place of worship”, said the statement.

After leaving the mosque, Zefzafi addressed a crowd in his neighborhood from the roof of his house ahead of an intervention of the Police to arrest him. Clashes erupted as the police tried to arrest Zefzafi causing several injuries among law enforcement officials. One policeman suffered a permanent handicap due a stone or hard object thrown by protesters causing a serious injury in his brain.

No injuries have been reported yet among Zefzafi’s supporters. However, upon orders from the General prosecutor 20 people close to Zefzafi were arrested on grounds of receiving funds from abroad to undermine Morocco’s public order and territorial integrity.

Zefzafi managed to escape and his whereabouts remain unknown. He addressed his supporters from an unknown location on a video relayed by local media urging for protests to continue and calling for a closure of shops and restaurants.

Tensions have been simmering in Al Hoceima since the death of Mohsin Fkri who was crushed in a garbage truck in an attempt to retrieve fish that was confiscated by the police last October.

Since then, protests have been building up in the city characterized by peacefulness.
But the core of the protests has a social and economic character. Chanting slogans and carrying banners and local protest flags, protesters called for more jobs, hospitals, a university and social justice.

Upon directives from King Mohammed VI, a Ministerial delegation visited the city last week and inspected the progress made in a set of projects in fields including infrastructure, health, education, fisheries and agriculture. In this regards, 20 billion dirhams have been allocated to carry out social and economic projects within the upcoming five years in the city and its region.