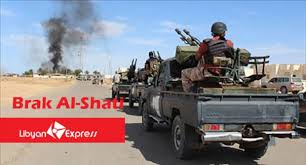 A spokesperson for the LNA confirmed the death toll of the attack at Brak Al-Shati air base, which was believed to be perpetrated by troops loyal to the UN-backed government of national accord (GNA).

The LNA spokesperson affirmed that civilians were among the dead, adding that “the soldiers were returning from a military parade. They weren’t armed. Most of them were executed.”

The GNA said that it decided to suspend its defense minister, Al-Mahdi al-Barghati, and the head of the Third Force from their duties until those responsible were identified. An enquiry was also launched to investigate the attack.

The attack has effectively shattered a fragile truce in the southern area, which has become a defacto frontline opposing the two rival armies in Libya: the LNA backing the Tobruk-based parliament and the internationally recognized GNA.

Martin Kobler, the UN envoy to Libya, denounced the attack expressing “outrage” at reports of fatalities and “summary executions” that, he said, could amount to “war crime.”

Human Rights Watch, quoting eye witness in the area, said that “soldiers from the 13th Battalion aligned with the GNA Defense Ministry attacked the base in Brak El-Shati, in southern Libya, on May 18, 2017, and executed troops from the 12th Battalion of the Libyan National Army (LNA)”. The executed soldiers were killed by shot guns in the head, HRW said.

Human Rights Watch also stressed that the parties to the conflict “are required to abide by the laws of war. Certain serious violations of the laws of war, when committed with criminal intent, such as executions of civilians or enemy fighters who had been captured or had surrendered, are war crimes.”

The attack has sapped all recent efforts at finding common grounds for negotiations between Libya’s rival governments and bodes ill for the settlement of the country’s civil war. The LNA officials vowed to take revenge, setting the tone of a vicious circle detrimental to the country’s stability and prosperity.