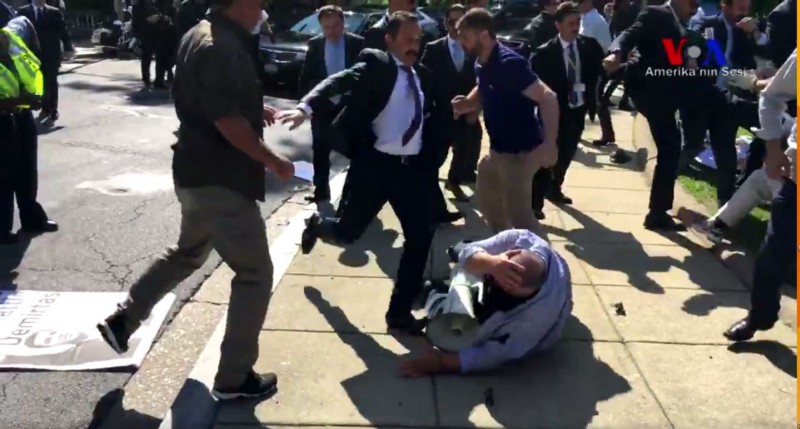 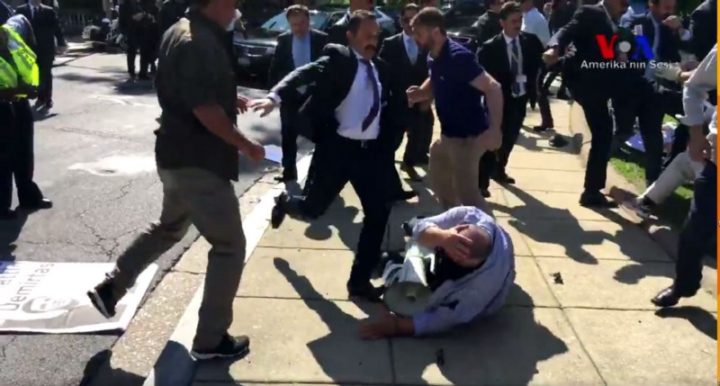 The US State Department has denounced the brutality of the security personnel accompanying the Turkish President after they roughed anti-Erdogan protesters Tuesday in Washington.
Footages of a brawl between a small group of protesters believed to be pro-Kurdish and some men dressed in black suits, identified as Erdogan’s security agents, went viral on social media.
The footages recorded in the street on Embassy Row in Washington, D.C., showed members of the Turkish security personnel pushing past US police and assaulting the protesters as Erdogan was due to arrive in the Turkish ambassador’s residence.
Eleven people, including a US officer were hurt in the brawl. Two men identified as 49-year-old Ayten Necmi of New York and 42-year-old Jalal Kheirabadi of Virginia, all US residents were arrested as main suspects.
Necmi is a supporter of Erdogan whereas Kheirabadi is a supporter of Kurdish causes.
The US State Department condemned the Turkish officials’ behavior.
“Violence is never an appropriate response to free speech, and we support the rights of people everywhere to free expression and peaceful protest,” State Department spokeswoman Heather Nauert said.
“We are communicating our concern to the Turkish government in the strongest possible terms.”
Edward Royce, Chairman of the House Foreign Affairs Committee, urged in a letter US Secretary of State Rex Tillerson to address the issue with Ankara.
“Alarmingly, this behavior is indicative of the broad crackdowns on political activists, journalists and religious freedom in Turkey that have greatly harmed Turkish democracy in recent years,” Royce wrote.
“I ask that you immediately look into this matter and bring all appropriate charges before these individuals leave the United States.”
The incident, which took place the same day Erdogan met with President Trump at the White House,  is said to have stained the diplomatic visit of the Turkish President who received assurance from Washington that the US position on Kurdish issue will not cloud relations between the two NATO allies.