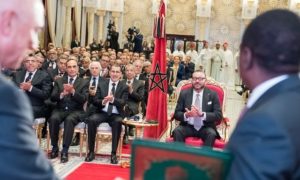 The Nigeria-Morocco huge gas pipeline project, agreed upon last year, is taking shape with the signing Monday in Rabat of additional agreements related to the pipeline that will stretch along the West African coast all the way up from Nigeria to Morocco and eventually into Europe.
The agreements were signed at a ceremony chaired by King Mohammed VI.
On this occasion, Moroccan Foreign Minister Nasser Bourita presented the broad lines of the pipeline project that reflects, he said, the shared vision of the two countries’ leaders, favoring a sustainable, active and solidarity-oriented joint development for Africa, in the frame of a mutually beneficial south-south cooperation.

The Nigeria-Morocco pipeline will have a positive impact on over 300 million inhabitants, Bourita said, noting that it would speed up electrification projects across West Africa, and serve as a basis for the creation of a competitive electricity regional market.
The pipeline project was first discussed by King Mohammed VI and Nigeria’s president Muhammadu Buhari at the UN Climate Summit COP22 in Marrakech last year in November and was further examined by the two heads of state during the Moroccan Monarch’s visit to Abuja the following month.
Besides promoting efforts to boost electrification in the region, the pipeline will add momentum to economic integration in West Africa and will also help Nigerian gas reach Europe.
The pipeline-related agreements were initialed by CEO of the Nigerian National Petroleum Corporation, Maikanti Kacalla Baru, and the director general of the Moroccan Office for Hydrocarbons and Mining, Amina Benkhadra.
The Monday ceremony was also marked by the signing of an agreement between the Moroccan state-owned phosphates OCP group and the Fertilizers Producers & Suppliers Association of Nigeria (FEPSAN).
FEPSAN Presiddent Thomas Ethu underlined that cooperation with OCP group helped, in a first phase, to transfer know-how on the commodity blending, storage and transportation.

CEO of the Nigerian Sovereign Investment Authority Uche Orji said that collaboration between the investment authority and OCP will help explore and upgrade phosphates reserves in Nigeria, mainly in the states of Sokoto, Ogun, Edo, and Imo.

CEO of OCP group Mostafa Terrab said that the partnership concluded between Morocco and Nigeria is a model of south-south cooperation.

It concerns the entire agricultural value chain, mainly the setting up of fertilizing solutions that are adapted to the Nigerian soil and cultivation, he said.
During the King’s visit to Abuja, the two sides signed a key agreement to build a fertilizers factory in Nigeria by OCP.
This cooperation will enable to maximize local fertilizer production, through the creation of a platform for basic chemical products, secure fertilizer supply at competitive prices and reinforce local distribution channels, and help thus Nigeria forge ahead with its agricultural development plan.
Nigerian Foreign Minister Geoffrey Onyeama who attended the ceremony said the conclusion of these agreements, only few months after the royal visit to Nigeria, evidences the success of the Rabat-Abuja partnership.
He described the cooperation agreement with OCP group as “a great opportunity” for Nigeria, adding that this accord, “which the Sovereign has generously facilitated, is a great opportunity for Nigeria in its quest for food self-sufficiency”.

“We have been concentrating on oil for years, and we have neglected agriculture. Today we are suffering the consequences,” said Oneyama, adding that thanks to Morocco’s fertilizer and phosphate resources, “We are now on the way to build a strong agricultural infrastructure”.
The momentum given to Moroccan-Nigerian partnership following the King’s watershed visit to Abuja last December reflects both countries’ strong willingness to act as drivers of regional economic integration through genuine south-south partnerships.