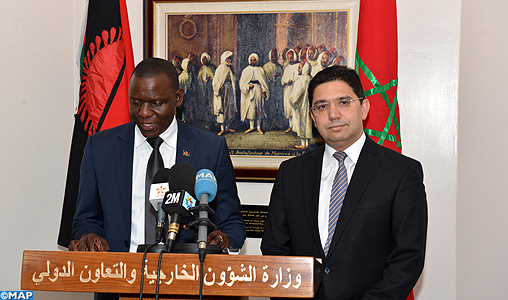 Malawi’s Foreign Minister, Francis Kasayla, has put another nail in the coffin of the Polisario by announcing his country’s withdrawal of recognition of the Algerian-sponsored SADR entity.

“The Republic of Malawi has decided to withdraw its recognition of SADR which it recognized on March 6, 2014, and to maintain a neutral position vis-à-vis the regional conflict over the Sahara,” said Francis Kasayla following talks in Rabat with Morocco’s Foreign Minister Nasser Bourita.

By withdrawing its recognition of the Tindouf-based separatist entity, the Malawi has joined its voice to more than two thirds of African countries who support Morocco’s sovereignty and territorial integrity.

The land has shifted once more under the feet of the Polisario separatists who see support for their separatist thesis waning in Africa and at the international level. This comes after the Polisario suffered several setbacks, the latest of which was the humiliating withdrawal from the buffer strip in the Guerguarat area on the borders with Mauritania and the adoption by the UN Security Council of resolution 2351, which reiterates support for the autonomy plan as a credible basis for reaching a mutual solution.

Overall, Morocco’s return to the African Union has set the tone for a gradual demise of the Algerian-sponsored separatism in the Sahara as the Kingdom and its friends will act as a bulwark against any attempt to use the pan-African body to simmer tension and instability in the region.