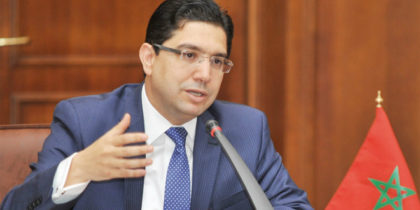 The membership of the Algerian-backed separatist entity, SADR, in the African Union is an “anomaly” that goes against the international law, said Morocco’s Foreign Minister Nasser Bourita.

Bourita told the French radio channel, RFI, that two thirds of African countries do not recognize the Algerian-sponsored separatist entity. He recalled that during the AU’s July summit in Kigali, 28 African states submitted a motion demanding the freeze of the membership of the Polisario in the pan-African organization.

Bourita explained that the participation of the Polisario in the African Union’s sectoral committees is an aberration since the SADR does not fulfill the attributes of state sovereignty.

The Foreign Minister highlighted that historical, cultural, geographic and economic ties as well as Morocco’s contribution to peace keeping in the region are all in favor of the Kingdom’s membership in the ECOWAS.

Morocco’s request to join ECOWAS is the continuation of a decades-long process of fostering ties with the countries of the region. With the inclusion of Morocco, the sub-regional grouping will bolster its aggregated GDP to the 16th rank globally ahead of Turkey and right after Indonesia.