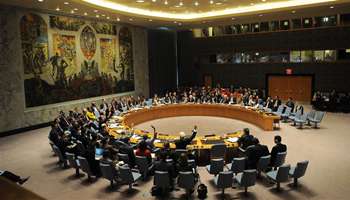 The UN Security Council unanimously adopted Friday Resolution 2351 extending the mandate of the UN mission in the Sahara, the MINURSO, for another year and calling on the parties to the conflict to engage in a fifth round of negotiations.

The resolution, drafted by Nikki R. Haley, the United States ambassador to the United Nations, was adopted in unanimity after the UN confirmed Polisario’s withdrawal from the Guerguarat area in the buffer strip.

The resolution reaffirmed the need for full respect of the military agreements reached with MINURSO with regard to the ceasefire and called on all the parties to adhere fully to those agreements.

Stéphane Dujarric, Spokesman for the Secretary-General, António Guterres, said that the MINURSO has confirmed the Polisario’s retreat from the Guerguarat on the Mauritanian borders.

“This action should improve the prospects of creating an environment that will facilitate early implementation of Mr. Guterres’s determination to relaunch the negotiating process,” Dujarric said, stressing that “realism” and the spirit of “compromise” are “essential” in order to achieve progress in the negotiations.
The process would be relaunched with a new dynamic and a new spirit that reflects the Security Council’s guidance and resolutions, with the aim of reaching a “mutually acceptable political solution,” the spokesman said.

In the resolution adopted Friday, the Security Council calls on neighboring States to cooperate more closely with the United Nations and to get more involved in ending the current impasse with a view to reaching a political solution. This call echoes the recommendation the UN Secretary-General Antonio Guterres made in his report, urging Algeria and Mauritania to cooperate fully in the endeavors seeking a solution to the Sahara conflict. In his report, Gueterres actually devoted large passages to Algeria, the neighboring country that supports, sponsors and arms the Polisario and that is therefore a party to the conflict, although it claims that it is not.

The Security Council also insists on “a political solution” to the Sahara conflict, and affirms that enhanced cooperation between the member states of the Arab Maghreb Union, would contribute to stability and security in the Sahel region.

Several countries and analysts have repeatedly warned against the risks associated with terrorism and all forms of trafficking as terrorists and traffickers find in regional conflicts a breeding ground for their activities. The Security Council has thus underlined this risk and called on Maghreb countries to work together to eradicate it.

The Council also called on the parties to adhere to their obligations under the ceasefire agreement and to respect both its letter and spirit, and to cooperate fully with MINURSO, stressing the need to ensure that tensions do not erupt anew in the Guerguerat area.

Tension started building up in Guerguarat last August when Morocco launched an anti-smuggling operation that has a police character to clear the region of all sorts of illegal commercial activities. Moroccan authorities also started asphalting a road to better monitor the area and bar traffickers and terrorist groups from setting up a safe haven in the buffer zone beyond Morocco’s security berm on the borders with Mauritania. But in February, Morocco responded positively to a call by the new UN Secretary General for both parties to withdraw from the area, while the Polisario scorned the call.

The Council also stressed the importance of “the commitment of the parties to continue the process of preparing a fifth round of negotiations”, noting that “realism and the spirit of compromise by the parties are essential for progress in the negotiations.”

The United Nations opened negotiations between Morocco and the Algerian-backed Polisario separatists in 2007, after Morocco presented an autonomy plan for the Sahara that the UN Security Council deemed as “serious and credible”. Several negotiation rounds were held since then, with the latest taking place outside of New York in 2012.

Bottom line, the Security Council’s resolution on Western Sahara is binding for the Polisario and its Algerian mentor. It also contains hints that the United Nations is realistic and determined to push for a political solution to a conflict whose persistence is a threat to the entire Sahel region.