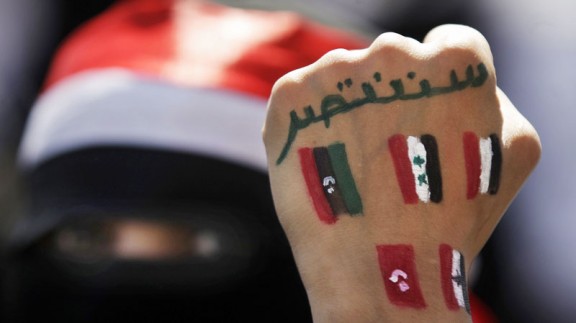 Freedom of Expression in Post–Revolution Tunisia, Gains and Pitfalls

In a brief conversation with a taxi driver who was taking me from Cartage international airport to down town Medina, I noticed glimpses of optimism in his speech. He said he was glad about the changes that took place in what he sometimes called “Modern Tunisia,” and some other times “post-revolutionary Tunisia.”

“We have lived for 23 long years in darkness. Fortunately this era is over for ever,” he said. “While you are in Tunis, walk along Habib Bourguiba Avenue and visit Sidi Bouzid, the cradles of Tunisian revolution. You will feel there is more freedom in the air.” The taxi driver’s assertions about a new Tunisia are not shared one hundred per cent by other Tunisians I met during my short visit to the North African country.

Many opposition figures were forced to leave their country and live in exile, including the current president Moncef Marzouki, who moved to France in 2002

Ben Ali’s regime was totalitarian. Prosecutions of opposition voices, human rights activists, journalists, and bloggers were common. Internet was censored and the media in general were muzzled. Many opposition figures were forced to leave their country and live in exile, including the current president Moncef Marzouki, who moved to France in 2002, and Rashid al-Ghannoushi, co-founder of the ruling Ennahda Islamist party, currently the largest party in Tunisia, who spent twenty two years exiled in London.
Both men returned to Tunisia following the 2010-2011 uprising and after President Zine El Abidine Ben Ali’s stepped down and left the country.
People were generally relieved after Ben Ali’s departure and a fresh air started blowing over the country but the battle for genuine freedoms is far from being over, argue many intellectuals, politicians and journalists.

Many commentators acknowledge that after the revolution freedom of expression improved and authorities started to take into account the principle of human rights, as they ratified a series of international human rights treaties and freed all political prisoners.  However, others assert that the authorities failed to upgrade political rights and civil liberties which sometimes recorded setbacks.
Salah Al mhamdi, a Tunisian blogger, a Global Voices author and Arabic translator: “Actually, there’s overall more freedom of expression in post-revolution Tunisia, especially press freedom and Internet freedoms.” “After the Revolution, people were given free access to many previously-blocked websites such as youtube.com, nawaat.org, aljazeera.net and dailymotion.com,“ says Salah who is also a reporter for the news website Al Mouaten.
Amnesty International’s 2012 report titled “Tunisia: At a crossroads, Tunisia must choose the path of human rights”, examines the challenges of achieving human rights since October 2011 elections.
“Tunisia was the birth place of the momentous events that swept the region in 2011. And while we acknowledge that measures were taken by the authorities to address the legacy of abuse and move forward, these did not go far enough, and there are now worrying signs that these and other urgently needed reforms could be at risk,” said Hassiba Hadj Sahraoui, Deputy Director of the Middle East and North Africa at Amnesty International.

Today, Tunisia’s political scene knows increasing threats on political rights and civil liberties, especially on journalists, activists, and bloggers. Human Rights NGOs also criticize the state of emergency which is repeatedly renewed since 14 January 2011, and which leads in many cases to the use of “unnecessary and excessive force” to face street protests.
“Everyone in Tunisia agrees that freedom of expression has been the most tangible result after the uprisings. Nonetheless, some challenges still need to be taken up. There have been some attempts to push back freedom of expression under several pretexts such as religion or indecency,” says Rabii Kalboussi, reporter at Tunisia Live.
“People are still learning what Freedom of expression does stand for and I hope they won’t miss this opportunity and that they will freely express themselves no matter what the circumstances are,” he says.
Human rights Activists call for new regulations to protect freedom of expression “I think that the revolution gave the Tunisian medias a lot of freedom and helped them break the silence. But at the same time the media scene is still suffering from the absence of a legal framework that would govern journalistic work,” says Marwen Ben Sghaier, Tunisian Masters student.

However, Freedom House, a Washington-based NGO that provides researches and advocacy on democracy, political freedom and human rights, underscored the new political rights status in post-revolution Tunisia. Tunisians enjoy more freedom of expressions, speech, assembly, as well as more religious freedom than what it was in president Zine el-Abidine Ben Ali’s era, Freedom House comments.
Overall freedoms in post–revolution Tunisia have recorded some substantial gains but more efforts are need to overcome remaining pitfalls and shortcomings.