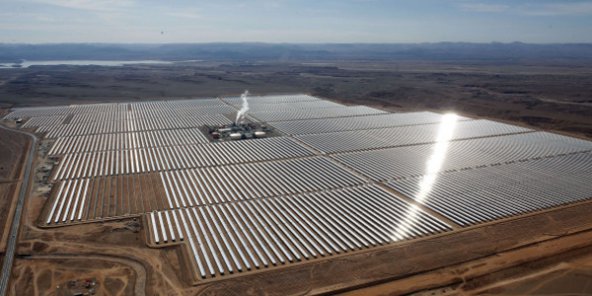 Morocco has bolstered its leadership in renewable energies with the inauguration of the fourth and final stage of the Noor Solar plant complex in Ouarzazate with a 582 MW total capacity. King Mohammed VI launched works to achieve the fourth phase, which uses photovoltaic (PV) technology to produce electricity. The site will have a capacity of 72 MW and will be achieved for a total cost of 750 million dirhams.

The Noor project is part of a low carbon economy endeavor launched by Morocco to bring the share of renewable energies in the national electricity mix to 52 pc by 2030.

The second and third power stations of Noor solar complex (Noor II and Noor III) were launched by the Sovereign on February 04, 2016.Their completion rate reached 76 and 74 pc respectively.

With a capacity of 200 MW, Noor II plant is developed on a maximum area of 680 ha, based on solar thermal technology, with cylindrical parabolic trough.