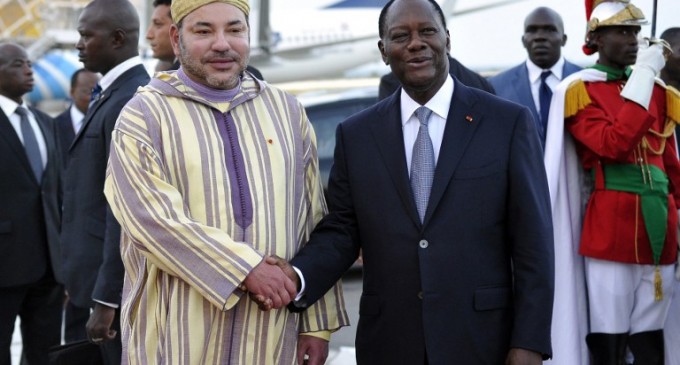 The return of Morocco to the African Union enables the kingdom to play a key role in promoting peace and stability efforts at the sub-regional and continental levels, said Côte d’Ivoire’s President Alassane Ouattara.

President Ouattara was quoted in a joint statement issued following the visit King Mohammed VI paid to Abidjan (February 24-27) as saying that Morocco’s return to the pan-African organization is reflective of the King’s strong determination to champion a south-south cooperation model that is geared to meeting development needs of the continent.

He added that the gas pipeline that will channel Nigerian gas to Morocco through West Africa is an example of a win-win cooperation approach that will benefit all coastal countries in West Africa and beyond.

The two leaders also voiced satisfaction at the level of their bilateral cooperation which has become a model for south-south cooperation in the continent.

The joint statement also highlighted the excellent ties between Morocco and Côte d’Ivoire, ties that have been cemented by 143 cooperation agreements.
The two heads of state voiced satisfaction with the results of the Côte d’Ivoire-Morocco Economic Impetus Group which recently held its second forum to survey the achievements it realized since it was set up in June 2015. They also stressed the need to speed up the implementation of their bilateral agreements to the best interest of the peoples of Morocco and Côte d’Ivoire.

The statement said that King Mohammed VI, who held in-depth talks with Presidet Ouattara, expressed Morocco’s support for Côte d’Ivoire’s bid to take a seat at the UN Security council for the 2018-2019 term.

The document reiterated the two leaders determination to support joint efforts and solidarity with a view to countering terrorism, crimes, cyber-crimes, maritime piracy and drug trafficking as well as their backing to the peaceful resolution of conflicts.

In the same vein, King Mohammed VI and President Ouattara called for concerted efforts in support of political, lasting and comprehensive solutions to the crises facing the continent.

The Royal visit to Côte D’ivoire was also an occasion to oversee the progress made in some Moroccan investments in the country such as the fish landing spots in Locodjro and Grand Lahou, projects worth $600,000 that will generate new jobs, optimize the economic performance of traditional fishing, and increase the income of more than 7,000 people.
The King also enquired about the progress made in the project to rehabilitate the Cocody Bay, which will cost $450 million.

Launched in 2015 by Ivorian authorities in collaboration with Morocco’s development agency, Marchica Med, the project stands as a shining example of a south-south cooperation approach that reconciles development needs with environment protection.

Moroccan peacekeepers have been deployed as part of the UN mission in the West African country since 2004.