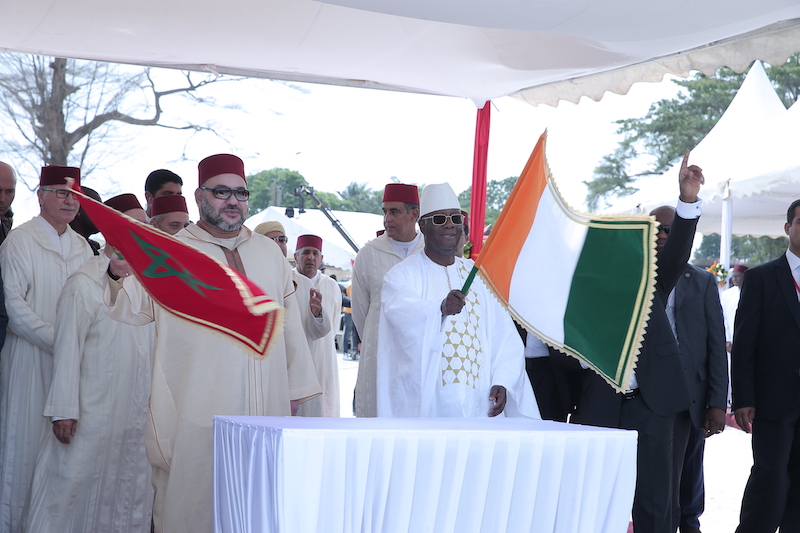 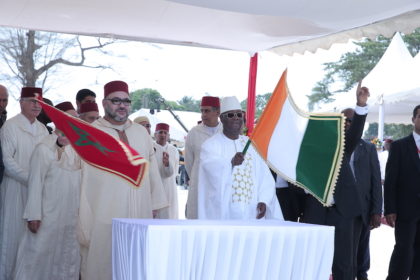 The construction works of a new mosque in Treichville, a neighborhood of the Ivorian capital city of Abidjan, were launched Friday by the Moroccan Monarch, who is on a friendship and work visit to Côte d’Ivoire, and President Alassane Dramane Ouattara.

The Mohammed VI mosque will cover 25,000 m2 and will include two prayer rooms for men and women that can accommodate more than 7,000 worshippers.

The project, to be completed in about 34 months, also includes a library, a conference room, a Koranic school, administrative buildings, as well as commercial shops, a parking lot and a Park.

The Monarch and his host had earlier performed the Friday prayer at La Grande Mosquée in Abidjan.

On this occasion, King Mohammed VI handed President of Côte d’Ivoire’s Supreme Council of Imams, Aboubacar Fofana, 10,000 copies of the Holy Quran destined to mosques in the country, including 8,000 copies in French.

The King was greeted by Ivorian Murshidins and Murshidates who graduated from the Rabat-based Mohammed VI Institute for Imams’ Training.

The religious preachers and councilors expressed gratitude to the Moroccan ruler for his unwavering efforts to promote the lofty values of moderate Islam and to share his country’s experience with other African countries.

The Mohammed VI Institute for Imams’ Training is part of a Moroccan ambitious program meant to fight radical Islamic militancy and dangerous extremist ideas. The institution provides training to hundreds of imams of various nationalities, mainly from Africa, but also from other countries such as France and Belgium.

The center seeks to inculcate in Imams the precepts of a tolerant and non-violent form of Islam based on Maliki rite and teach them how to fight extremism and religious radicalization through sound argumentation and dialog.

Morocco has been providing, for years if not for centuries, training to foreign Islamic scholars and Imams, mainly from sub-Saharan Africa, in order to disseminate an “Islam of the middle path doctrine,” a vision of religion based on tolerance, intercultural dialogue and respect of other faiths.

North Africa Post's news desk is composed of journalists and editors, who are constantly working to provide new and accurate stories to NAP readers.
NEWER POSTSpain: Moroccan arrested for threatening to blow off train
OLDER POSTFour Terrorist Groups Merge under Banner of Al Qaeda in Sahel