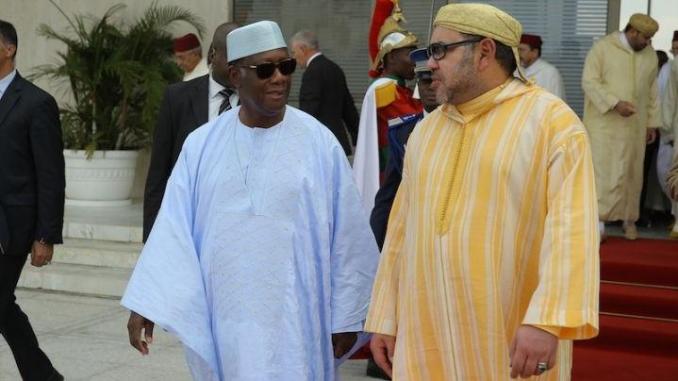 Strengthening the friendship ties and economic partnership existing between Morocco and Côte d’Ivoire is on top of the agenda of the current visit King Mohammed VI is paying to Abidjan.

Commenting on the visit, Ivoirian President Alassane Ouattara said the visit is “a new sign of confidence and friendship” towards his country.

He expressed delight to welcome the Moroccan King for a new visit, underscoring that relations between the two countries “are very close.”

This visit, the sovereign’s 4th to Côte d’Ivoire in five years, will be marked by talks between the two African leaders and the signing of several cooperation agreements.

The two Heads of State are expected to dedicate an emergency medicine training center at the University Hospital of Yopougon and visit a fishing project in Locodjoro, meant to upgrade traditional fishing and improve working conditions of small-scale fishermen.

The King will also visit the Cocody Bay, rehabilitated in the context of bilateral cooperation.

The Moroccan company “Marchica Med” has been entrusted in 2015 with working out a master plan for the safeguard and development of Cocody Bay, which was highly polluted and was suffering from repeated flooding and accelerated silting because of massive urbanization of the Gourou basin.

This ambitious project was developed in close collaboration with the Ivoirians and financed by the Moroccan Attijariwafa Bank and its Ivoirian subsidiary. The joint project illustrates the partnership binding the two African countries, which share the same vision for African development

As Abidjan was readying to welcome King Mohammed VI on Friday, the two countries’ business communities held their third forum to survey the progress of their partnership and explore new prospects for its expansion.

Head of the Ivoirian Economic Impulse Group (EIG) Jean-Marie Ackah and President of the General Confederation of Enterprises of Morocco (CGEM), Miriem Bensaleh Chaqroun, have both described economic partnership between the two countries as excellent and exemplary.

Since 2011, Morocco has considerably accelerated the pace of its investments in Côte d’Ivoire to top the list of foreign investors in the country. Morocco was outpaced by France in 2016, but is now coming back in the race, exploring new partnership and investment opportunities.

And Morocco’s economic offensive is not directed at Côte d’Ivoire only. Large Moroccan companies, both public and private, have set foot in several African countries, operating in the sectors of telecommunications, banking, insurance and reinsurance, real estate, cement and pharmaceutical industries, NIT, etc.