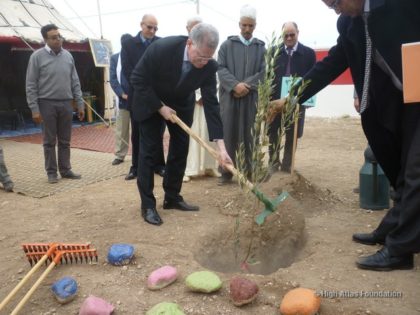 The High Atlas Foundation (HAF) announces the third Monday of January, which corresponds this year to January 16, as a Tree Planting Day across its project sites in Morocco.

“On January 16th, HAF is planting trees with members of local communities and students of all ages in 16 provinces of Morocco at approximately 50 locations,” the Foundation says in a statement.

In this respect, HAF in partnership with the Rabat branch of the Science Teachers will be planting trees at the Larbi Doghmi High School in Temara-Skhirat with the participation of students and in special attendance of the US Ambassador to Morocco, Dwight L. Bush and the Adviser to the King André Azoulay, the statement says.

The third Monday of January was selected for planting the trees drawing on the same day in the US which celebrates the legacy of Martin Luther King who recognized the power of service, adds HAF in the statement.

HAF notes that tree planting on the third Monday of January is a means to begin each year “with a commitment to making your community a better place.”

“Growing trees are an integral part of achieving the people’s development.  Who is taking this action with us?  Interfaith groups, cooperatives of women, partners in government at all levels and civil agencies, the living honoring the departed, students of all grades, and we hope that you will if you wish,”  HAF co-founder and President Dr. Yossef Ben-Meir highlights.

The High Atlas Foundation (HAF) is a Moroccan association and a U.S. 501 (c) (3) nonprofit organization founded in 2000 by former Peace Corps Volunteers, and is dedicated to participatory grassroots human development in disadvantaged areas in Morocco, mostly rural.

HAF received United Nations Special Consultative Status in 2011. The Foundation works to establish development projects in Morocco that local communities design and manage, and that are in partnership with government and non-government agencies.

Newer PostLibya: “Meeting with Kobler, a Waste of Time,” Haftar
Older PostHRW Calls on Algeria to End Confinement of Women In Tindouf Camps