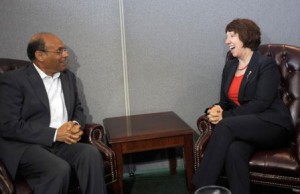 Tunisia has gained the European Union advanced status, becoming the 2nd North African country after Morocco to obtain such a title, the status of a privileged partner with the EU.
The decision was made during the Tunisia-European Union (EU) Association Council’s 9th session held lately in Brussels. Tunisia has requested last March an EU advanced status in a bid to carry on its Euro-Mediterranean integration. Most of European countries back Tunisia endeavor, describing the North African country, cradle of the Arab Spring, as “a reliable, serious and essential partner in the Mediterranean basin”.
The advanced status will enable Tunisia benefit from financial, technical and advisory support for its democratic transition and comprehensive reforms. It will also boost cooperation between the two parties in various fields such as scientific research, social affairs, citizen mobility and job creation.
Under the privileged partnership agreement sealed between the two sides, the EU has pledged to provide Tunisia with more financial and technical assistance that would stimulate the country’s economy and strengthen its position in the Mediterranean region.
The agreement will also allow Tunisian agricultural products access to the European market and contribute to the promotion of Tunisian industries. But some economists and politicians are concerned over some lingering differences on agriculture and immigration policies.
EU-Tunisian relations are governed by the association agreement signed in 1995, the first to be signed by Europe with a country from the southern shores of the Mediterranean. The agreement covers political, economic, social, scientific and cultural cooperation and provides for the gradual establishment of a free trade zone.
The Tunisian-European partnership, which is celebrating this year its 30th anniversary, contributed to building a diversified, fruitful and mutually beneficial co-operation based on shared values and mutual respect and understanding.