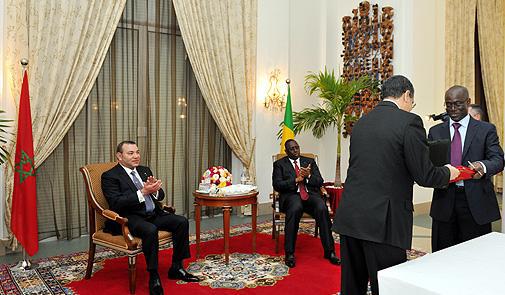 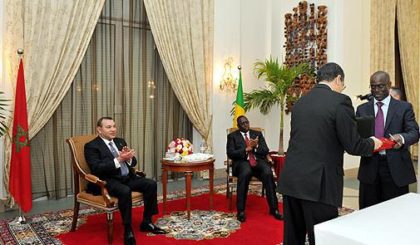 Morocco and Senegal, two Atlantic African coutries with a time-honored friendship and cooperation are offering Africa a concrete example proving the farsightedness of south-south cooperation based on solidarity and co-development.

On Sunday, a new milestone was hit in Moroccan-Senegalese relations with the speech delivered in Senegal’s capital, Dakar, by King Mohammed VI, in which he highlighted the centuries-old ties between the two countries as well as his keen interest in Africa.

In keeping with the spirit of co-development and solidarity, King Mohammed VI and Senegal’s President Macky Sall chaired Monday, after they held tête-à tête talks, the signing ceremony of agreements under which Senegal will benefit of Morocco’s experience in terms of promoting small-scale farming and rural development.

Speaking on this occasion, Morocco’s agriculture minister, Aziz Akhannouch, said the new agreements aim at strengthening cooperation in the fields of training, technology and funding.

Morocco’s King and Senegal’s President also chaired the signing ceremony of two agreements on the implementation of the Moroccan-Senegalese agricultural partnership program. The first agreement provides for facilitating funding for small scale farming projects and for rural development, while the second deals with an octopus fishing development plan.

King Mohammed VI who started his current official visit to Senegal on Sunday, paid tribute to Senegal in the traditional speech marking the Green March, that was delivered for the first time outside of Morocco.

In recognition of Senegal’s unwavering support of Morocco’s territorial integrity, the King recalled that Senegal was among the states which participated in the Green March national epic, together with other African and Arab countries.

“Senegal has always been at the forefront of advocates of the Kingdom’s territorial unity and lofty interests. Furthermore, on several occasions, it has shown, through words and deeds, that it considers the cause of the Moroccan Sahara as one of its own national causes,” said the King.

He pointed out further that “Moroccans will not forget the courageous, solidarity-based stance taken by this country when Morocco decided to withdraw from the Organization of African Unity, back in 1984. The then President, Mr. Abdou Diouf, deemed that it was impossible to imagine the Organization without Morocco. The same stance was adopted by many African states, such as Guinea, Gabon and former Zaire.”

The Monarch explained that he chose Senegal to deliver a speech marking a national event for the first time outside of Morocco “because of the special status Senegal enjoys in Africa, thanks to its historically democratic model, its political and social stability, as well as its economic dynamism.”
the choice was also dictated by “the fraternal bonds, based on solidarity and a shared destiny, which have historically existed between the Moroccan and the Senegalese peoples, who stand as one single people, with each one forming a natural extension of the other, in a unique symbiosis between two independent countries respecting each other’s particularities.”