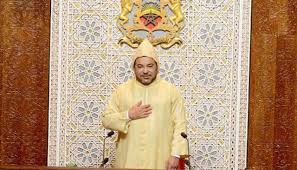 “I urge everyone – the Government, Parliament, political parties, trade unions, civil society organizations and civil servants – to commit to a keen sense of national responsibility in order to come up with real solutions so as to enhance the performance of state agencies and to improve the quality of the services offered to the citizens,” said the Sovereign in a speech marking the opening of the legislative year on Friday.

Addressing the members of the Parliament’s two houses (the just elected House of Representatives and the House of Advisors) the King congratulated the newly elected MPs on the trust placed on them by citizens and commended public authorities for “their commitment to a keen sense of national responsibility throughout the electoral process.”

The Sovereign then dwelt on the underlying theme of the Royal address, namely enhancing the performance of administrative bodies and improving the services they provide.

“Managing the citizens’ affairs and serving their interests are both a national responsibility and a sacred trust, and in this regard there is no room for negligence or procrastination,” the King said, before he enumerated a set of shortcomings undermining the effectiveness of public administration, such as weak performance and issues relating to the quality of the services provided to citizens.

State agencies “suffer from an inflated workforce, from the lack of competence and from the absence of a sense of responsibility among many employees”, King Mohammed VI deplored, adding that the civil service basically suffers from a longstanding culture which is widespread among most Moroccans, who think that the civil service is a refuge that guarantees them a monthly salary without having to account for performance.

For the Monarch, the goal of state agencies is to enable the citizen to obtain the services he needs in the best conditions and shortest time frame, to simplify procedures and to make sure that services are readily available to the citizens and that institutions are accessible to them.

The King gave expropriation as an example of administrative shortcomings. According to him, “expropriation should occur only in cases of absolute necessity and in the public interest, with immediate compensation, based on market prices applicable on the date of the transaction; procedures for the payment of compensation should also be simplified.”

Investment is another field affected by the inefficient administration, deplored the monarch. He urged that problems should be dealt with and files processed on the spot in order to ease administrative formalities for investors.

When investors are discouraged by red tape, the country is deprived of opportunities for investment and development. And the citizens are denied employment opportunities, the King underlined.

The Monarch recommended adequate staff training, e-governance and the use of new technologies to be taken into account in the reform of the public administration, adding that the civil service “should be on the basis of competence, merit and equal opportunity.”

The Sovereign also stressed the need for state agencies to implement advanced regionalization with a view to making their services as well as decision-making centers accessible to the citizens.

North Africa Post's news desk is composed of journalists and editors, who are constantly working to provide new and accurate stories to NAP readers.
NEWER POSTMorocco Welcomes Appointment of Antonio Guterres as UN Chief
OLDER POSTMorocco on the Global Gas Map by 2019