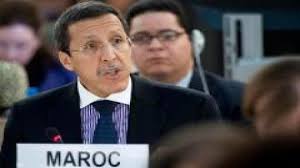 Morocco has strongly protested against maintaining the Sahara issue on the decolonization agenda of the Fourth Committee of the UN General Assembly on grounds that it violates the UN charter and the mandate of the Security Council.

In an address before the Fourth Committee, Morocco’s representative at the UN, Omar Hilale, denounced the aberration of listing the Sahara issue on the decolonization agenda quoting Article 12 of the UN charter which clearly stipulates that “while the Security Council is exercising in respect of any dispute or situation the functions assigned to it in the present Charter, the General Assembly shall not make any recommendation with regard to that dispute or situation unless the Security Council so requests.”

Hilale argued that the Sahara issue should no longer be examined at the Fourth Committee since it has been part of the jurisdictions of the Security Council since 1988.

In this respect, the Moroccan diplomat deplored the confusion surrounding the Sahara issue at the UN which continues to be examined by both the Security Council and the Fourth Committee.

He warned of the repercussions of such incoherence on the credibility of the UN and called for respecting the UN charter in order to find a lasting resolution to the regional dispute over the Sahara.

Maintaining the Sahara conflict on the agenda of the fourth committee goes in total contradiction with the Security Council approach which examines the issue as part of Article VI relating to the peaceful resolution of conflicts, recalled Hilale, noting that the Security Council has never considered the Sahara dispute as a decolonization issue.

He pointed out to the Madrid Agreement signed with Spain in 1975 to retrieve the Saharan provinces in accordance with the UN Charter, and recalled that the agreement was submitted to the UN Secretary General and was recognized by resolution 3458B of the UN General Assembly.

This conflict could not have been perpetuated if it has not been for Algeria’s obstinacy and its regional hegemony ambitions, said Hilale.

The Moroccan diplomat deplored that Algeria acts out of hostility to Morocco’s territorial integrity by manipulating the principle of self-determination, which Algiers interprets as separation, secession and partition.

“Any attempt aimed at the partial or total disruption of the national unity and the territorial integrity of a country is incompatible with the purposes and principles of the Charter of the United Nations,” Hilale quoted article 6 of resolution 1514 as saying.