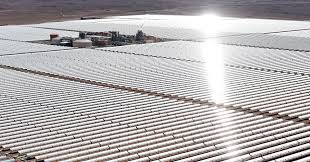 Thanks to its largescale investments in renewable energy, Morocco is becoming a vanguard of solar revolution, US business channel CNBC said.

CNBC highlighted the efficiency of the CSP in power production using mirrors to concentrate the sun’s energy in order to drive steam turbines or engines which, in turn, generate electricity.

“As demand grows I think in future we will see a country like Morocco stop building fossil fuel based plants, and it will automatically move everything into renewables,” Paddy Padmanathan, chief executive and president of ACWA Power, told CNBC’s Sustainable Energy.

The first phase of a 9 billion dollar solar-power project that has been under construction since 2013 opened earlier this year, making use of vast arrays of mirrors, rather than the more widely used photovoltaic panels, to produce electricity from sunlight.

When it is finished in 2018, the Noor Solar Power station will cover more than 5,000 acres and have a generating capacity of 580 megawatts, enough to meet the electricity needs of 1.1 million Moroccans, according to the World Bank.

Through its renewable energy strategy, Morocco has set the goal to generate 42 percent of its energy from renewable sources by 2020 and 52 percent by 2030.