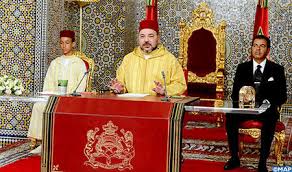 Commentaries by western intellectuals, media and government officials continue to hail King Mohammed VI for his speech against radicalism and terrorism.

In a recent commentary on the French Le Point newspaper, French philosopher Bernard-Henri Lévy highlights that at a time the west is mired in a sterile burkini debate, King Mohammed VI delivered a speech- on the occasion of the 63rd anniversary of the Revolution of the King and the People- putting Morocco at the forefront of the fight against terrorism and radicalism.

He points out to the farsightedness expressed by King Mohammed VI in his speech on August 20 in which he stood up against terrorism by shoving aside bogus religious claims and reminding the world that suicide and murder are not permitted in Islam.

Lévy points to the particularity of the King’s speech, saying that the Monarch has a unique standing that distinguishes him from other heads of state in the region. He notes that the King’s Muslim authority as “Commander of the Faithful” and his lineal descent of the Prophet Mohammed gives him an edge in bringing the war against radicalism to their own territory by putting them “outside the law of humans and God.

He added that Morocco’s King addresses the theological root-causes of radicalism and recognizes the link between the misinterpretation of religion and the ideology that feeds terrorism, accordingly he proved the unfoundedness of the terrorists’ referential framework and dismissed the arguments of radicals by citing verses from the holy Quran that condemn terrorism and the killing of innocents.

The King’s speech was widely echoed by western media in countries with a large Moroccan diaspora, such as France and Belgium where leading papers lauded the call by the Sovereign on Moroccans immigrants to remain faithful to their traditions of tolerance and to be good citizens in the face of the surging amalgams.

Le Monde, Le Figaro and Paris Match shed light on the pertinence and timeliness of the speech where the King calls on the Moroccans “living abroad to remain firmly committed to their religious values and to their time-honored traditions as they face up to this phenomenon which has nothing to do with their culture or background. I also urge them to maintain their good reputation, to show forbearance in these trying circumstances, to close ranks and to be, as always, staunch advocates of peace, concord and co-existence in their country of residence.”

In the English media outlets, notably the BBC and Forbes, to mention but a few, the message of the King’s speech was described as “bold.” In this respect, Forbes magazine published an article entitled, Arab King: Terrorists Are ‘Not Muslims’ And Will ‘Dwell Forever In Hell.” It draws a conclusion from the speech saying: “We can dry up terrorist support by challenging the religious basis of Islamic extremism, reveal its religious claims as false and remind would-be American and European recruits that there are strict Islamic laws against suicide, murder and injustice.”

King Mohammed VI condemnation of terrorism in the strongest terms and his message to Muslims, Christians and Jews to close ranks and form a common front against extremism also received praise from the French and the Belgian governments as well as the EU.

The King’s speech also tackled the central place of Africa in Morocco’s foreign policy, the need to boost measures aiming at helping and integrating African migrants as well as the need to foster solidarity with Algeria.