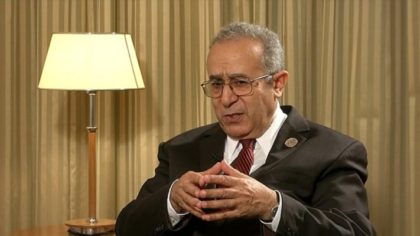 Algeria’s foreign Minister Ramtane Lamamra made a volte face saying his country is looking forward to fostering cooperation with Morocco “at all levels.”
This statement, relayed in Algerian media, came as a surprise to observers who see in Lamamra a staunch advocate of separatism as he spared no effort in lobbying against Morocco’s supreme interests since he took office.
The remarks came as Morocco is celebrating the 63rd anniversary of the Revolution of the King and the People which was marked by a Royal speech calling for “sincere solidarity” between Morocco and Algeria in line with the longstanding ties of fraternity between the two Maghreban peoples.
“We hope that the commitment and sincere solidarity which have always bound the Algerian and Moroccan peoples will be rekindled so that we may continue to work together, honestly and in good faith, to serve Arab and Maghreb causes and rise to challenges in Africa,” King Mohammed VI said in the speech he delivered on Saturday.
On the same occasion, Algeria’s President Bouteflika sent a message to king Mohammed VI voicing willingness to strengthen ties. Lamamra said this message shows Algeria’s readiness to cooperate with Morocco.
This represents a sign of an approaching appeasement in the Moroccan-Algerian diplomatic ties. Yet, on the ground, nothing confirms that. Algeria continues to feed Polisario’s separatism militarily, financially and diplomatically, thus blocking efforts towards a negotiated solution to the conflict over the Sahara. The two countries continue to exhaust their respective budgets in an arms race that bodes ill for the region. Worse yet, Algeria persists in its obstinacy not to open borders with Morocco under different pretexts.