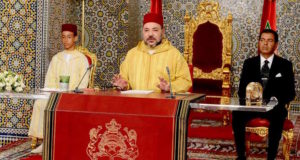 King Mohammed VI stressed the need for closing ranks in order to counter the scourge of extremism and terrorism that targets innocents and hinders efforts towards coexistence, social progress and prosperity.

“As ignorance spreads in the name of religion, Muslims, Christians and Jews have to close ranks in order to tackle all forms of extremism, hatred and reclusiveness,” said the King in a speech on the occasion of the 63rd anniversary of the Revolution of the King and the People marked on August 20.

He deplored that Moroccan migrants in Europe bear the brunt of terrorist attacks and stigmatization and denounced the attempts to link extremism – rightly or wrongly – to migrants.

In this respect, the Monarch urged Moroccans abroad “to maintain their good reputation, to show forbearance in these trying circumstances, to close ranks and to be, as always, staunch advocates of peace, concord and co-existence in their country of residence.”

The Sovereign went on to explain the reasons behind the backlash of terrorist activities and their distortion of the image of Islam by radicals. “Those who engage in terrorism, in the name of Islam, are not Muslims. Their only link to Islam is the pretexts they use to justify their crimes and their folly. They have strayed from the right path, and their fate is to dwell forever in hell,” the Monarch said.

As for Jihad, the King made it clear that this concept is not synonymous to killing innocents. Jihad is rather “governed by specific conditions, including the fact that it is to be resorted to only for defense purposes – not for murder or aggression.”

“Those who call for murder and aggression, those who excommunicate people without a legitimate reason, those who interpret the Quran and the Sunnah to suit their purposes, are actually lying to Allah and His Messenger,” the King said.

The Sovereign warned that terrorists take advantage of some young Muslims- particularly in Europe- and their ignorance of the Arabic language and true Islam to spread their distorted message.

He strongly denounced how several Muslim groups have appointed themselves as sole authorities on Islam while excluding others. “Such attitudes encourage the spread of the extremist ideology, of excommunication and terrorism, for terror advocates believe that this is the path to true Islam. These people need to take a hard look at themselves and decide to what extent they are responsible for the crimes and human tragedies perpetrated in the name of Islam,” said the King.

The Monarch went on to argue that social progress hinges on countering radicalism and hatred which feed insecurity and instability.