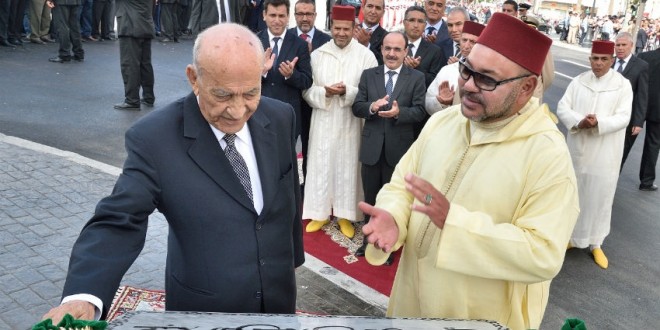 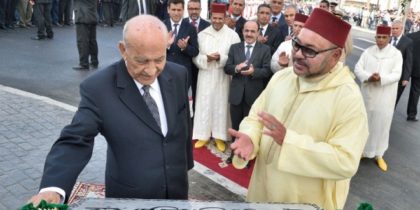 A tribute was paid to national figure Abderrahmane El Youssoufi on July 30 by King Mohammed VI who named a street in Tangier after him. With such a tribute, Abderrahmane El Youssoufi, national movement leader, co-founder of the leftist party the USFP and former Prime Minister, becomes one of the rare national personalities who saw their name given to a street in their hometown while they are still alive. Only members of the Royal family enjoy this privilege.

This gesture represents recognition of Youssoufi’s patriotism, leadership and altruism in serving the nation’s supreme interests both in the opposition and in office.  The timing in which this Royal tribute was paid is also full of significance as it coincides with the celebrations marking the accession of King Mohammed VI to the Throne.

Born in 1924, El Youssoufi engaged at an early age in political life by joining the Istiqlal party in Casablanca during the colonial era (1944-1949). Afterwards, he moved to France where he studied law and contributed to the efforts aiming at organizing Morocco’s working class.

El Youssoufi, then, returned to his hometown where he became a lawyer. His political engagement will undergo a turning point when he co-founds with key figures such as Mehdi Ben Barka and Abderrahim Bouabid the party of the National Union for Popular Forces (UNFP), an opposition outspoken leftist organization that seceded from the Istiqlal party.

The creation of the UNFP will put El Youssoufi in direct confrontation with Hassan II regime. In 1959 El Youssoufi will be arrested along with UNFP leader Mohamed Basri for stressing that accountability of the government should be to the people and not to the King. This call was then perceived as an offense to the King and El Youssoufi was accused of inciting crime and undermining public order. El Youssoufi and his colleague were sentenced in 1963 to two years in prison for conspiring against the regime.

Following the assassination of Mehdi Ben Barka in 1965, El Youssoufi will leave to France where he will stay 15 years. During that period, he joined several human rights NGOs. At that time, he was accused in Morocco and sued between 1969 and 1975 for conspiracy with the death sentence issued against him.

In 1978, the death sentence was dropped against El Youssoufi who became a member of the political bureau of the UNFP which changed its name to the Socialist Union for the Popular Forces (USFP).

In 1992, El Youssoufi was designated first secretary of the USFP. His denunciation of the electoral fraud will lead him to a voluntary exile in France. Two years later, he returned to Morocco and in 1998 he became Prime Minister leading Morocco’s political alternance experience.