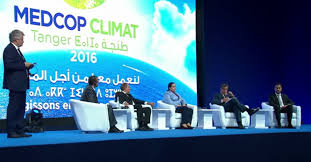 The second Conference of Parties of the Countries Bordering the Mediterranean on Climate Change (MedCOP Climate 2016) held in Tangiers July 18-19 called for a collective mobilization to fight climate change and stressed the need to implement appropriate actions adapted to the specificities of Mediterranean territories.

The final document adopted by the conference, meant to contribute through a regional perspective to the international efforts against climate change, recommended the adoption of a strategy for adaptation to climate change, based on coordinated and ambitious action plans.

The document also urged Mediterranean States to adopt a common stand in Marrakech during the 22nd Conference of Parties of the UN framework Convention on climate change (COP22) and to strengthen their cooperation, notably by developing research, providing access to financing methods tailored to the territory and the economy and accelerating the transfer of skills and capacity building.

The presidents of regions, local authorities, entrepreneurs, economic and social decision-makers and civil society in the Mediterranean have undertaken to make their actions sustainable in view of a true positive climate agenda in the Mediterranean, coordinated by a permanent structure based in Tangier, according to the document.

Thus, they agreed to make the Mediterranean an area of excellence demonstrating that mitigation and adaptation to climate change constitute a lever for economic, social and cultural development of the region.
In a message he addressed to the conference, King Mohammed VI underscored that “the Mediterranean is probably going to be one of the regions most impacted by global warming in the world,” and that this warming “will affect natural resources as well as major sectors of economic activity, such as agriculture, fisheries, tourism, industry, energy production, etc.”

The Sovereign argued, however, that “this unique multicultural area of convergence, exchange and interaction has the potential to become a source of strength based on solidarity, to rise to the climate change challenge and collectively build the resilience needed.” “The Mediterranean is in a position to turn the necessary mitigation and adaptation measures into levers for the achievement of inclusive, successful sustainable development,” the King said.

“Today, the Mediterranean must set the tone not only in terms of developing a new mode of consumption and production, but also with respect to innovation in combating climate change and, more generally, in achieving sustainable development,” the Moroccan king said, noting that “our region will have but one destiny: the one we shall strive to give it.”

Organized by the Region of Tanger-Tétouan-Al Hoceima, the Mediterranean multi-actor climate conference brought together representatives from Mediterranean countries, private sector, civil society, as well as regional and international organizations.

The two-day event provided opportunity to discuss the implementation of the Paris Agreement adopted in December 2015, to highlight the existing initiatives related to the climate action in the region and to formulate innovative ideas.

MedCOP Climate was both a crucial milestone in the region’s preparations for COP22, to be held in Marrakesh on 7-18 November 2016, and a milestone in the implementation of the Paris Agreement, through specific regional actions.

North Africa Post's news desk is composed of journalists and editors, who are constantly working to provide new and accurate stories to NAP readers.
NEWER POSTMorocco’s Move to Rejoin AU: Not Fortuitous But Realpolitik
OLDER POSTMorocco Takes Part in Meeting of Global Coalition to Counter ISIL in Washington