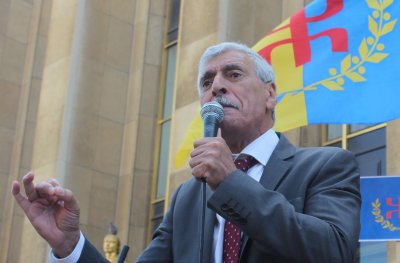 Ferhat Mhenni, the leader and founder of the Movement for the Autonomy of Kabylie (MAK), was denied an entry visa on Friday by a Morocco’s consulate in Villemomble in France, Algerian media reported.

Mhenni, who holds a passport of a political refugee, was planning to speak at a conference held within the framework of the Timitar festival in Agadir.

The media outlets affiliated with the Kabylie autonomous movement, such as Siwel.info, described the refusal of visa to Mhenni as a volte face by the Moroccan government and denounced what they perceived as an ambiguity by the the Islamist-led government which they have accused of hostility towards Amazighe militants.

This visa denial to a radical opposition movement in Algeria comes at a time a Moroccan delegation was visiting Algiers to hand a message from Mohammed VI to President Abdelaziz Bouteflika as part of a Moroccan diplomatic offensive in Africa to campaign for a return to the African Union.

In response to Algeria’s support for the Polisario separatist, Moroccan diplomats gave Algiers a taste of its own medicine by invoking on multiple occasions the right to self-determination of the Amazigh (Berber) Kabyles. Last October, the Deputy Permanent Representative of Morocco to the UN, Abderrazzak Laassel, denounced the repression by the Algerian regime of the Kabyles whom he described as an “eight million people with 9,000 years of existence,” entitled to their “autonomy” and “the recognition of their cultural and linguistic identity”.