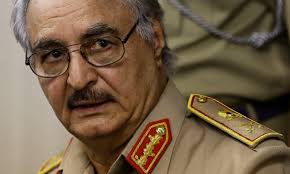 Khalifa Haftar, head of the Libya National Army, who is currently visiting Moscow held talks with Defense Minister Sergei Shigou and Russia’s Security Council Secretary Nikolai Patrushev on ways to strengthen and consolidate Libya and the delivery of weapons.

He is expected to have a meeting “in the foreign ministry” on Wednesday according to Russia’s Ambassador to Libya Ivan Molotkov but he didn’t reveal the officials that Haftar would be meeting. Haftar and his forces are loyal to the Tobruk-based House of Representatives (HoR.)

Moscow acknowledges the authority of the UN-backed Government of National Accord (GNA) and Faiez Serraj as the Prime Minister-designate but has stressed that its recognition of GNA will be fully fledged only when the HoR approves the GNA and the Libyan Political Agreement (LPA.)

Meanwhile in Tobruk, Mohammed Al-Raeid, a member of the HoR said Speaker Agila Saleh “shoulders the responsibility for what happened during the previous sessions when a vote of confidence for the government was on the table.” The parliament has failed to hold a vote of confidence on the GNA, which divided MPs over the arrangement of the parliament’s agenda. Raied said the HoR must exert “huge efforts to contain the chaos that now persists in the country” as he showed his support to the GNA.

Following Haftar’s visit, the supply of weapons by Russia could further complicate the path to peace in Libya considering that there is still a UN arms embargo on the country.

Russia could be intensifying its role in Libya as unconfirmed reports claim that Ahmed Maetig, one of Hafter’s outspoken opponents, would be visiting Moscow very soon.

In March, Lavrov described Libya as a “black hole” from which weapons and militants spread through a dozen other countries.