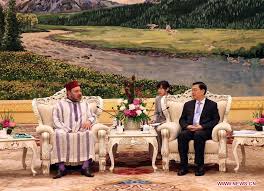 No sooner said than done!

On Wednesday, Morocco and China signed a joint statement establishing a strategic partnership between the two countries. Under the joint statement, the two countries vowed to deepen cooperation in areas including petroleum, mining industry, agriculture, environmental protection, ocean fisheries, infrastructure construction and digital communication. They also pledged to expand cooperation in renewable energy, and develop partnership in industry, metallurgy and electronics.

On Thursday, the two countries started honoring their pledge and King Mohammed VI presided over the signing ceremony of fifteen partnership agreements between both the public and private sectors.

The first MoU signed during the ceremony is related to the creation of new logistics and residential zones in the northern region of Tangiers. The project, to be developed by the Chinese HAITE group, was already contained in the strategic development plan envisioned by King Mohammed VI as early as 2003, when the Tangier-Med project was launched.

Since then, the King has been closely following the development of the Tangier-Med project, meant to be a flourishing industrial zone, leading to the creation of more wealth and more jobs.

According to a Moroccan analyst, the project falls in line with Morocco’s regionalization process, which consists in providing regions with adequate development means, and is consistent with the country’s policy to enhance the various regions’ competitiveness and consequently the overall competitiveness of the Kingdom.

In an increasingly globalized world, the new logistics and residential zones in Tangiers will further strengthen the anchoring of the country as an inescapable pole of exchange in its regional space, said the analyst.

For him, the fact that China, one of the world’s leading industrial powers, showed interest in the region, will undoubtedly buttress the standing of the Tangier-Med project.

Other agreements are related to the extension and maintenance of the Jerada thermal power plant, investment and finance cooperation through Industrial and Commercial Bank of China Limited, and the purchase and construction of an electric bus-manufacturing unit in Morocco.

Other accords provide for the setting up of a number of industrial units in Morocco, including a solar water-heaters production unit, the development of a production unit for photovoltaic cells, the construction of a cement plant, and the establishment of a Chinese-Moroccan industrial park.

A MoU provides for the development of an industrial and logistical hub for manufacturing spare parts for railway, car and aeronautics industries.

The two sides also agreed to set up a Chinese-Moroccan one-billion dollar investment fund targeting the sectors of aeronautics, finances, industrial parks and infrastructure, to launch a fund management company and to reinforce partnership in the fields of life insurance in China and aircraft leasing. Part of their technical partnership, a bank on new technologies will be set up in China.
A number of other accords signed Thursday provide for joint actions to back up African enterprises, fund development projects in key-sectors in Africa, develop logistics zones in the continent and develop an E-market platform for Chinese products destined to Africa by using Morocco as a distribution hub and a gateway to Africa.
All these agreements, in addition to the strategic partnership launched on Wednesday by King Mohammed VI and President Xi Xi Jinping, will give a new momentum to the special relations between the two countries and enhance the solid bonds of friendship and mutual esteem between the two nations.

As put by King Mohammed VI in a message of thanks to the Chinese President at the end of his official visit to China, “This is a tangible embodiment of our shared will to build a special, effective, solidarity-based and multi-dimensional South-South cooperation model from which our peoples stand to benefit greatly and which will contribute to promoting security, peace and stability around the world.”