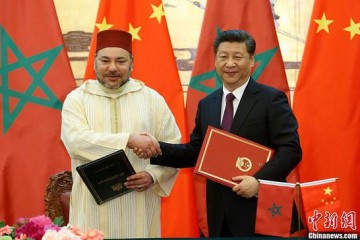 Morocco-China Strategic Partnership, a Roadmap to Shore up Longstanding Ties

Morocco and China have drawn a roadmap to enhance their relations and strengthen their decades-long ties through the strategic partnership sealed on Wednesday during the official visit King Mohammed VI is paying to China.

The joint statement setting up this strategic partnership, which was signed by King Mohammed VI and President Xi Jinping, translates the two States’ determination, despite the long geographic distance separating them, to set up a mutually beneficial cooperation model that will have a positive impact on the two countries but also on their respective partners.

Many analysts have described the signing of the Strategic Partnership Declaration as an important turning point in the relationship between Morocco and China and a token of the special ties biding the two countries, as China has so far signed similar strategic partnership accords with only thirty countries worldwide.

For many analysts, these special ties are quite natural, since China has become a world economic power and Morocco is consolidating its standing as a regional player, in the Maghreb, in the Arab World, and in Africa.

So, Morocco, thanks to its outstanding geographical and strategic position, can be for the Empire of the Middle a bridge towards Africa, Europe and Arab countries, especially so that Peking is granting an increasing interest to Africa and knows that Morocco can be a valuable partner in conquering the African market.

Besides, the two countries share similar values regarding the preservation of world peace, stability, and security and have the same concerns to defend their national unity, independence, sovereignty and territorial integrity.

Under the joint statement establishing the strategic partnership, the two sides reaffirmed “the principle of respecting all countries’ sovereignty and territorial integrity, and vowed to support all sides’ efforts to maintain peace and stability of the regions they belong to.”

They also called for peaceful solutions to international and regional crises and disputes; expressed opposition to interference in other’s internal affairs, to the use of force or threat by force; and condemned terrorism under all its forms.

Therefore, reaching out to China is not a fortuitous decision. It illustrates Morocco’s new strategic and foreign policy vision, spearheaded by King Mohammed VI.

Just few weeks after it reached out to Russia and the Gulf countries, Morocco now looks forward to developing relations with China.

“Though it remains committed to its strategic relations with its allies, Morocco has, in recent months, sought to diversify its partnerships at political, strategic and economic levels,” said king Mohammed VI in the speech he delivered during the first Morocco-GCC summit held in Riyadh on April 20.

So, the king’s visit to China, the second after that of 2002, is seen as a strong illustration of the North African country’s resolve to diversify its partnerships and to open new cooperation prospects with friendly States.

As evidence to this resolve to consolidate bilateral relations, boost trade exchanges and encourage Chinese nationals to visit Morocco, King Mohammed VI announced during his talks with President Xi Jinping his decision to give a visa waiver for Chinese nationals as of June 2016.

In this vein, the two sides signed fifteen agreements and MoUs covering cooperation in the judicial; economic; financial; industrial; and energy sectors. The accords also cover cooperation in the areas of infrastructure; tourism; culture; science, technology and defense industry; and food security.

The central banks of China and Morocco on the other hand signed a three-year currency swap deal worth $1.53 billion (10 billion yuan.) The deal will facilitate bilateral trade and investments.

These agreements, primarily those dealing with economic and industrial partnership, are meant to boost cooperation between the two countries in sectors with strong potential for job creation and added value, such as automotive; textiles and clothing; household appliances; aviation and logistics; and other areas of common interest.

Some thirty Chinese companies are established in Morocco and operate in the sectors of fisheries, plastic processing, motorcycles assembling, minerals and renewable energies. Their workforce is made up of nearly 1,100 Chinese nationals and 3,000 Moroccans.

It is well anticipated that the newly signed accords will encourage more Chinese companies to install in Morocco and to promote cooperation between Chinese and Moroccan firms and businesspersons.